Linux turns 25, with corporate contributors now key to its future

What's the weather in Hell today? Linus Torvalds has visited Microsoft at LinuxCon

On August 25, 1991, an unknown Finnish developer posted the following to the comp.os.minix newsgroup:

Hello everybody out there using minix -
I'm doing a (free) operating system (just a hobby, won't be big and professional like gnu) for 386(486) AT clones. This has been brewing since april, and is starting to get ready. I'd like any feedback on things people like/dislike in minix, as my OS resembles it somewhat (same physical layout of the file-system (due to practical reasons) among other things).

That developer was of course Linus Torvalds and his free operating system came to be known as Linux. It's since more or less conquered the world, first becoming the de facto heir to proprietary Unix and latterly serving as the operating system for enormous numbers of devices large and small.

El Reg runs on Linux and these days even Microsoft is embracing the OS, offering it in its cloud, porting products to it and even putting Linux to work running is data centre switches.

Yes, That's Linus Torvalds chatting with us at the @OpenAtMicrosoft booth. #LinuxCon pic.twitter.com/E4LGj9zYig

As part of celebrations to mark the occasion the Linux Foundation has published its annual Linux Kernel Development Report.

The report (PDF)* concludes that Linux is in great shape and opines “There may be no other examples of such a large, common resource being supported by such a large group of independent actors in such a collaborative way.”

They've got a lot to work on: the report notes that the first versions of the Linux kernel comprised about 10,000 lines of code. Now it's nearing 22 million and growing at a rate of 4,600 lines a day.

The report also details who those independent actors are, listing the top 30 individual and corporate developers. 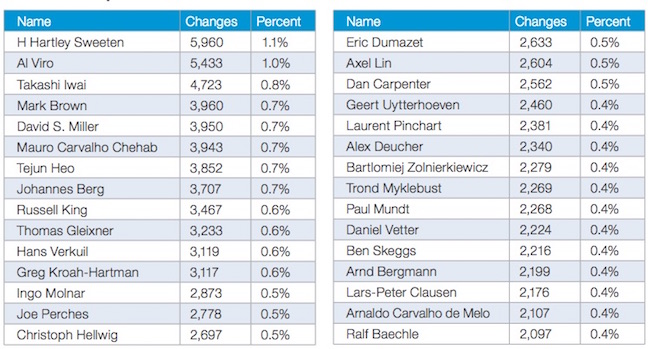 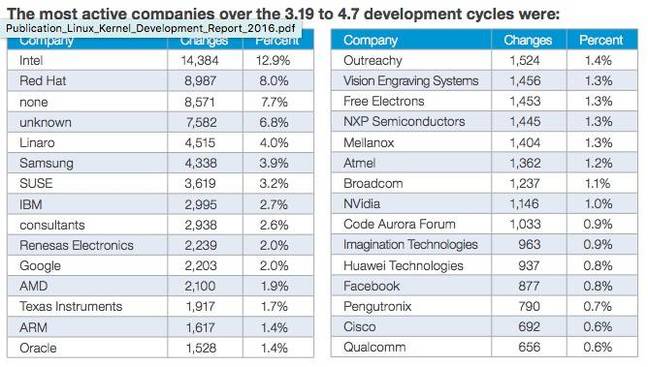 The top 30 companies contributing most to the Linux Kernel

“The top 10 contributors, including the groups 'unknown' and 'none'” make up nearly 54 percent of the total contributions to the kernel,” the report says, noting a slight decline from last year's report. “It is worth noting,” the report adds, “that, even if one assumes that all of the 'unknown' contributors are working on their own time, well over 80 percent of all kernel development is demonstrably done by developers who are being paid for their work.”

Just 7.7 per cent of contributions are now made by unpaid developers, a decline from 14.6 per cent in 2012 but one that the Linux Foundation thinks is an indicator of the extreme employability of proven kernel contributors rather than an indication of developer disengagement.

The report concludes with “Lessons from 25 Years of Linux” that suggests a fast release cycle, creating a pool of maintainers, the advent of Git and the open nature of the project have all been critical to Linux's success.

“Above all,” it concludes, “25 years of kernel history show that sustained, cooperative effort can bring about common resources that no group would have been able to develop on its own.” ®

*The Linux Foundation would rather you give it some personal information before downloading, at this form.