According to Chipzilla, the first wave of the new Cores will appear in 10mm-thick notebooks and two-in-one convertible tablets aimed at small businesses and normal folk. The CPUs will consume 4.5W to 15W, depending on the model, and go on sale in more than 100 laptop designs by the end-of-year shopping rush. They'll include Intel's usual integrated HD Graphics chipset.

Come January, enterprise PCs, workstations and beefier notebooks and desktop systems will ship with the chips, some with Intel's Iris graphics chipset. Presumably that's when you'll be able to get your hands on individual processors to build you own rigs by hand.

The latest tock was the introduction of Skylake on 14nm. The next tick was going to be Cannonlake, aka Skylake on 10nm, but that was delayed to 2017 because Intel couldn't perfect the shrink in time. So in the meantime, we've been lumped with Kaby Lake, an optimized Skylake redux on 14nm. (Intel has now given up on the tick-tock approach, for what it's worth.)

What do we mean by optimized? Well, for one thing, better physical manufacturing techniques. Intel says it has improved the fin design and the channel strain in its FinFETs. The shape of the fin has a massive effect on the operation of the transistor, potentially reducing the leakage current significantly. Increasing the strain in the channel increases performance and lowers power consumption by cutting the atomic forces that interfere with electron flow. 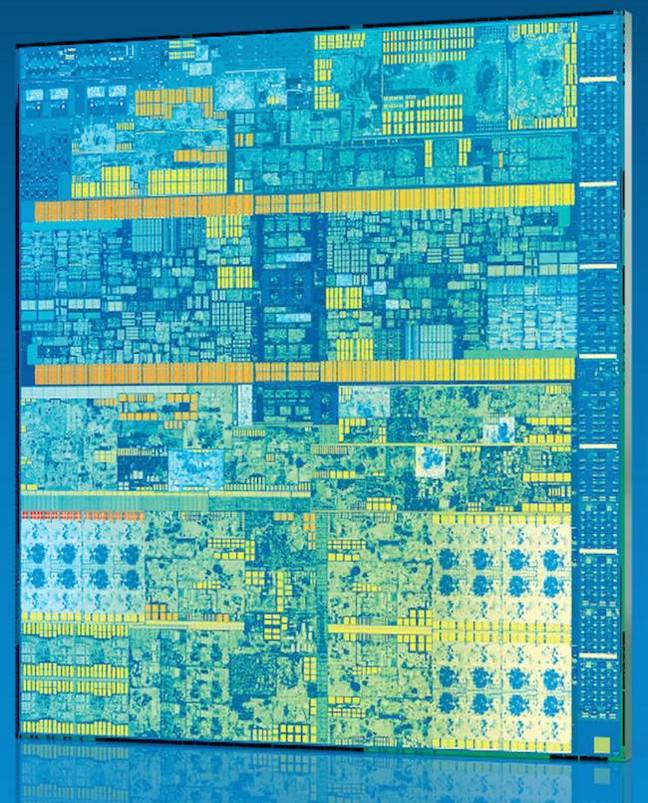 According to Intel, these fabrication improvements from Skylake to Kaby Lake, plus some CPU enhancements, give seventh-generation Cores up to a 12 per cent performance boost over the sixth-generation – well, when running the SYSmark benchmark on a seventh-gen 15W 3.5GHz Core i7 7500U versus a sixth-gen 15W 3.1GHz Core i7 6500U. When running the WebXPRT benchmark on the same chips, the performance boost from Skylake to Kaby Lake can reach up to 19 per cent, we're told. 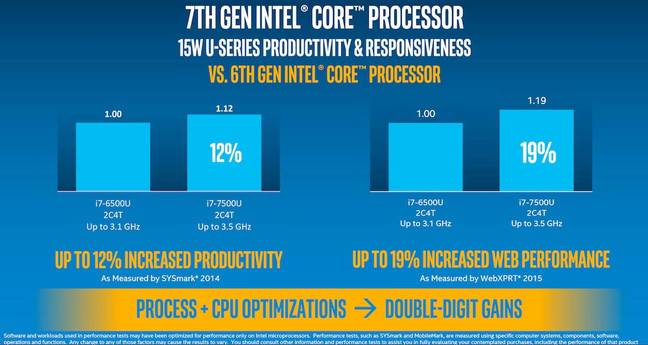 So in other words, changing up from a 2015 Core i7 to the equivalent 2016 part can speed up web browsing by up to a fifth, in theory. Chipzilla also says its seventh-generation Cores are more power friendly when streaming vids: the new Core i7 7500U can play 4K VP9 video for seven hours on a 66Whr battery that a sixth-gen Core i7 6500U chomps through in just four hours when streaming the same material.

That's generation on generation, though. These figures are only of use to snarks like us who want to see what Intel engineers have achieved in the past year, and for geeks who upgrade their machines every 12 months.

Intel really hopes Kaby Lake prizes punters off their 2011-era PCs; anyone tempted to replace their computer will be blown away by the improvements in the past five years and crack out their credit card. At least, that's the dream.

Intel reckons today's seventh-gen Core i5 7200U is 70 per cent faster than its five-year-old Core i5 2467M equivalent in SYSmark benchmarks, can convert a 4K video to 1080p H.264 6.8 times faster, and score three times better in the 3Dmark gaming benchmark.

More information on the individual chips, and their speeds and feeds, will appear, as always, on Intel's ARK closer to launch.

Finally, there's an addition to Kaby Lake: a new media-processing engine. This performs VP9 and 10-bit HEVC/H.265 decoding in hardware, as well as the usual 1080p HEVC, to reduce power usage even when viewing high-res video – meaning more internet streaming before your battery runs out. Intel calls this "All Day 4K" where "all day" means "nine and a half hours." 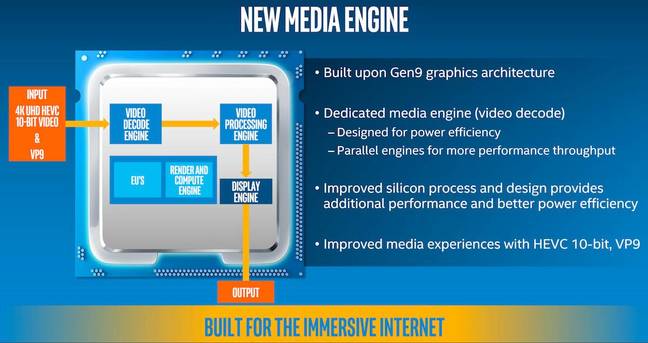 Kaby Lake chips are able to decode up to eight 4Kp30 AVC and HEVC streams at a time – useful for signs and surveillance gear – and decode 4Kp60 HEVC at up to 120Mbps, which is handy for watching high-quality films and TV on the internet.

This video engine also enforces anti-piracy DRM protections as required by the major studios. Hollywood bosses didn't want to stream 4K ultra high-def content from online clouds without mechanisms in place to thwart casual rippers, and so Intel gave the entertainment giants what they wanted.

"There are hardware-based protection mechanisms to make the studios comfortable with sharing high-quality content to PCs for the first time," said Regis. ®