Biz has signed up Fujitsu as a licensee for its technology

NRAM, non-volatile RAM, is based on carbon nanotube (CNT) technology and has DRAM-class read and write speeds. Nantero says it has ultra-high density – but no numbers have been given out – and it's scalable down to 5nm, way beyond NAND.

Fujitsu is focussing on multiple markets and product development is under way, with 256Gbit 55nm chips expected in 2018. The Fujitsu fabs will move on to 40nm lithography in a later stage. Nantero has one fab partner working on 28nm lithography.

CNTs are 1/50,000th the diameter of a human hair. These tiny cylinders are 50 times stronger than steel, half the density of aluminum, and have better thermal and electrical conductivity properties than any other material scientists are aware of today.

Manufacturing involves a small number of process steps and only one mask layer. A film of CNTs is deposited on a silicon substrate containing an underlying cell select device and array lines (typically transistors or diodes) that interface with the NRAM switch. The CNTs in the film are crossed and can be touching or separated. 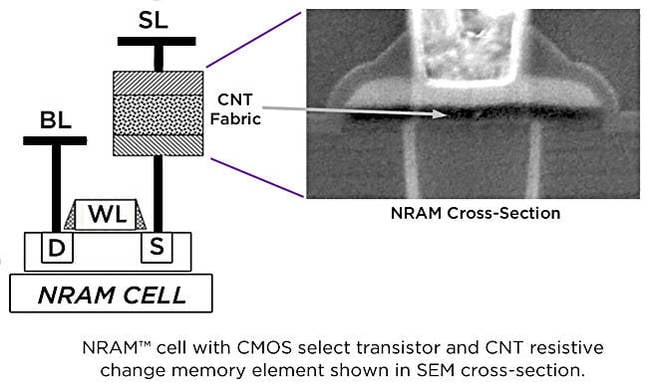 When separated (off), the CNT material resistive state is high and signals a "zero." A lower resistive state occurs when they touch and that signals a "one." SET (off to on or 0 to 1) is an electrostatic operation, while RESET (On to off, 1 to 0) is a phonon-driven operation with phonon heating of CNT contacts. 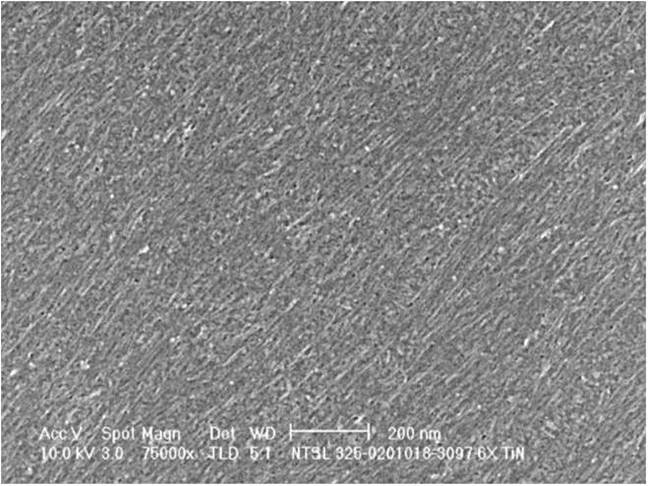 Image of NRAM seen by a scanning electron microscope 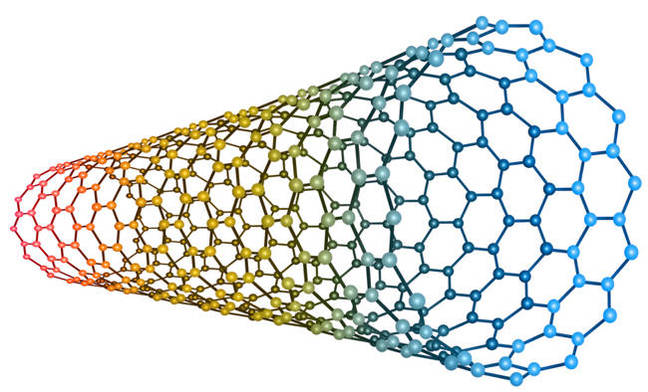 Schematic of the technology's carbon nanotube

Nantero says the chips can be multi-layer, meaning 3D, and have 1 or 2 bits per cell. Power use is effectively zero in standby mode.

NRAM cells can be placed in two or more resistive states, depending upon the resistive state of the CNT fabric. If all the CNTs are switched from touching to separated or vice versa, then that is a 1-bit cell, like SLC flash. But the material can be programmed to move a subset of the 100s of CNTs in a cell from touching to separated or vice versa. If the subset is half the cell's CNTs then we have a 2-bit cell and four resistive states. Theoretically a design with three subsets gives us a 3-bit cell.

The technology has been tested for endurance and 1011 program/erase cycles have been validated – that's 100 billion cycles. Reliability-wise it retains data for >1,000 years at 85oC or 10+ yrs at 300oC.

Its latency is 50ns or less – DDR4 DRAM-class latency we are told by Nantero cofounder and CEO Greg Schmergel – which implies c14ns.

Its power draw is slight, as it's only moving carbon nanotubes a few angstroms when data is written.

Chips can be fabricated in existing CMOS facilities. A Nantero spokesperson said; "We have NRAM designed into 7 CMOS fabs around the globe right now in fact, working on the same lines with no new tools."

We're told Fujitsu Semiconductor has been designing and producing FRAM, a type of non-volatile RAM, since the late 90s, and is one of the few companies to have integrated FRAM design and production capabilities. It will be able to build on this experience and skills to develop and produce NRAM chips. 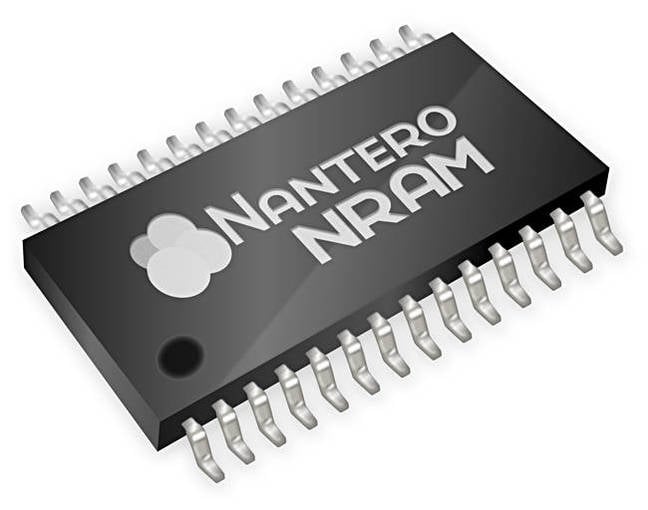 Since we last wrote about Nantero in June last year, 3D NAND has come into prominence, and Intel and Micron's XPoint memory has come into public view as well as Toshiba and WD/SanDisk ReRAM technologies. XPoint is in the perceived lead position to fill the DRAM-NAND price/performance gap.

We might imagine that an XPoint/ReRAM-using server system has both DRAM and XPoint/ReRAM whereas an NRAM-using system might just use NRAM, once pricing facilitates this.

Nantero licenses its patent-protected IP to foundry operators, like Fujitsu, and they will price the resulting chips. Although NRAM manufacturing would seem dramatically simpler than XPoint in terms of process steps and process complexity, the chip prices will depend upon wafer yields and demand. Getting more wafers off a production line lowers their unit cost. We might expect initial NRAM manufacturing costs to be high because demand will be low, and thus NRAM chips will have a relatively higher cost.

Until a foundry operator such as Fujitsu reveals information about wafer size and yield, we are in the dark. Then that operator has to sell the raw chips and/or DIMM or BGA-mounted chips (meaning a controller of some kind, and interface circuitry), onto a system builder. That system builder has to ensure its system's software can use the NRAM.

We are surely looking at 2019 at the earliest for the first NRAM-using products to appear. Expect more Nantero NRAM foundry partners to emerge in the next few months. ®