The European Space Agency's Sentinel-1A satellite has been hit by an unidentified flying object while in orbit. Panic not: the probe remains fully operational.

At 1707 GMT on August 23, the satellite's ground controllers noted that the bird changed its orientation and orbit slightly, and there was a small loss of power generated by its solar arrays. From telemetry data, the boffins on the ground figured it was best to take a closer look at the solar arrays.

Sentinel-1A is fitted with two cameras that were used just after launch to check that the solar panels had deployed correctly. Since then they have been shut down, but have now proved useful again, since they showed a crater about 40 centimeters (15.7 inches) wide on one of the arrays.

"Such hits, caused by particles of millimeter in size, are not unexpected. These very small objects are not trackable from the ground, because only objects greater than about 5 cm [2 in] can usually be tracked and, thus, avoided by maneuvering the satellites," said Holger Krag, head of the Space Debris Office at ESA. 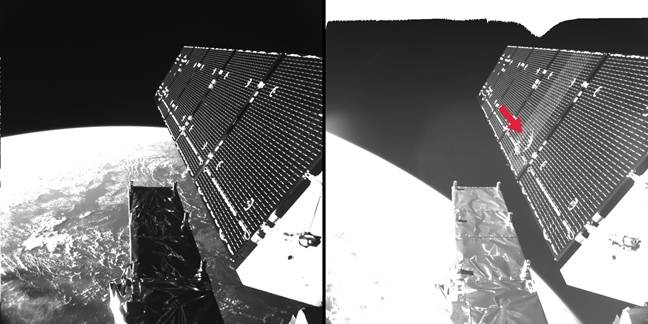 "In this case, assuming the change in attitude and the orbit of the satellite at impact, the typical speed of such a fragment, plus additional parameters – our first estimates indicate that the size of the particle was a few millimeters."

Krag said it wouldn't be possible to work out if the impactor was man made or just one of the many pieces of debris left over from the formation of the Solar System. Given the relatively low orbit of the satellite (it's 700 kilometers or 435 miles up), it's perfectly possible that the hit was caused by some of the huge cloud of junk left behind from nearly 60 years of space exploration.

Thankfully the impact won't harm the satellite's ongoing mission to send back regular images of Earth for the Copernicus environmental monitoring network. The satellite was built to produce more power than it needs, as a hedge against the eventual degradation of the solar cells. ®