Ahuna Mons, the 13,000 foot high, 11 mile wide volcano on dwarf planet Ceres is made entirely out of ice – and provides evidence that water may have once existed beneath the planet's surface.

"Ahuna is truly unique, being the only mountain of its kind on Ceres," said David Williams, co-author and associate research professor in Arizona State University's School of Earth and Space Exploration. "It shows nothing to indicate a tectonic formation, so that led us to consider cryovolcanism as a method for its origin."

A team of scientists working with NASA’s Dawn mission have published a paper in Science that shows the volcano was created by ice – unlike all the volcanoes on Earth which formed from lava.

Ahuna Mons is a giant mountain with a icy volcanic dome, a so-called cryovolcano. All volcanic activity for cryovolcanoes happens at low temperatures; they spew icy magma which can consist of freezing water, ammonia or methane instead of hot bubbling lava.

The lack of craters on the volcano’s surface meant it was probably formed quite recently – a couple of hundred million years at most.

Ottaviano Ruesch, lead author of the paper and a NASA scientist working on the Dawn mission, said: "This is the only known example of a cryovolcano that potentially formed from a salty mud mix, and which formed in the geologically recent past."

The possibility of cryovolcanism on Ceres has important implications. Not only does this confirm the dwarf planet’s surface temperature of minus 40oC, but it also suggests that its interior has kept warm enough for a sea of salty liquid water to exist below the planet’s surface for a relatively long time.

"Ceres appears differentiated internally, with a core and a complex crust made of 30 to 40 per cent water ice mixed with silicate rock and salts," said Williams. 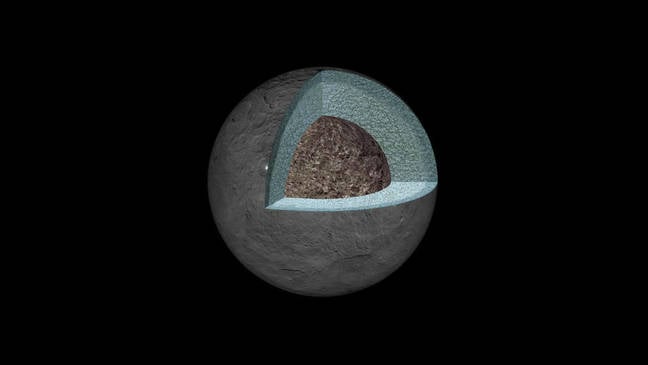 The space probe on NASA’s Dawn mission has also spotted other evidence of cryovolcanism on Ceres.

Many craters on the surface are flatter than if they were produced from meteorite impacts, and scientists believe they were formed from water flooding from below. Several cracks on the craters shows that icy “magma” has risen underneath.

Dawn will continue taking data from Ceres for about a year. Scientists will monitor any changes in Ceres’ surface as journeys closer to the Sun, where it will reach its closest point in April 2018. The warmth may even trigger volcanic activity, the scientists said.

Ceres isn’t the only object in the Solar System with signs of cryovolcanism. Spacecraft have detected evidence of icy volcanic activity on Jupiter’s moon Io, Neptune’s moon Triton and Saturn’s moon Enceladus. ®