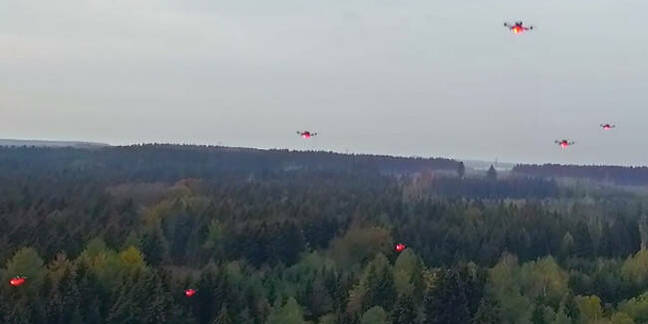 Chipzilla has obtained a waiver from the US aviation regulator that will let it fly the massive drone show on American soil without the need for further clearance or special permission.

That waiver, based on the FAA's Rule 107, allows Intel to perform the demonstration of 100 drones, each controlled by the same operator, lining up with light boards to display its iconic logo.

The Drone 100 shows have been conducted by Intel on several occasions around the world, including a show earlier this year over Sydney Harbour depicted in the video below.

Though the Rule 107 process has been seen as a more efficient way for smaller companies to make use of drones in their business activities, in Intel's case the rule is also allowing the multi-billion dollar company to expand its large-scale drone operations.

Natalie Cheung, unmanned aerial vehicle (UAV) product manager for Intel's perceptual computing group, told The Register that the Rule 107 waiver replaces an old process that Intel (and other businesses) had to undergo in order to get Section 333 exemptions signed off by the FAA before flying drones commercially.

On August 29, the FAA sought to largely eliminate the need for those exemptions when it implemented Rule 107, a set of guidelines that allows companies to obtain a one-time license to fly small drones commercially.

Intel's waiver goes a step further and allows the company to also fly its drones after dark and pair multiple craft with a single operator, things not normally allowed under Rule 107. This, in turn, allows the Drone 100 shows to take place in the US at special events without having to go through as many hoops.

Granted, Intel had a significant leg-up on getting the waiver; it had previously worked with the FAA under the old Section 333 process, and Intel CEO Brian Krzanich personally chaired an FAA small drone advisory committee.

"It was easy to work with the FAA, we used a lot of what we had with our Section 333 waiver," Cheung said.

"There were not any questions about the use case, because this was something they had seen before."

While letting Chipzilla run light shows with a hundred drones is all well and good, the Section 107 waiver could also help to push the development of technologies that would have a more immediate real-world impact.

In the long term, Cheung said that the hardware and software Intel is developing to control 100 drones at once, and the work it did with the FAA to get the process green-lighted, could be used by companies to operate "fleets" of drones to perform tasks such as surveying an area through a single point of control.

"I see there is a huge potential for this technology," she said.

"Having a fleet versus just one drone can make operations more efficient and faster." ®