Pic Your correspondent noted something odd during his flight to VMworld 2016 aboard Australian airline QANTAS: during the pre-flight safety briefing passengers were told to ask the crew for help if they lost their phones aboard the A380 and not, repeat not, to try to find it themselves.

The Register asked QANTAS why it now makes that announcement and was told the reason is this Australian Transport Safety Bureau (ATSB) investigation into a May 2016 fire aboard an A380 caused by “a crushed personal electronic device (PED) wedged tightly in the seat mechanism.”

The incident took place in seat 19F, a business class seat that uses some mechanical jiggery-pokery to extend into a flat bed (or so we're told: your correspondent seldom cracks Premium Economy). The ATSB report doesn't explain how the phone made it into the seat, but says a passenger on the flight “alerted the cabin crew to the presence of smoke in the cabin.”

“Two of the cabin crew proceeded to the source of the smoke with fire extinguishers. At the same time, the customer services manager (CSM) made an all stations emergency call on the aircraft interphone to alert flight crew and other cabin crew to the presence of smoke.”

Once the crew figured where the smoke was coming from, they “removed the seat cushions and covers from seat 19F while the CSM turned off the power to the centre column of the seats. When the seat was further dismantled.”

“The cabin crew assessed that the crushed PED contained a lithium battery.” 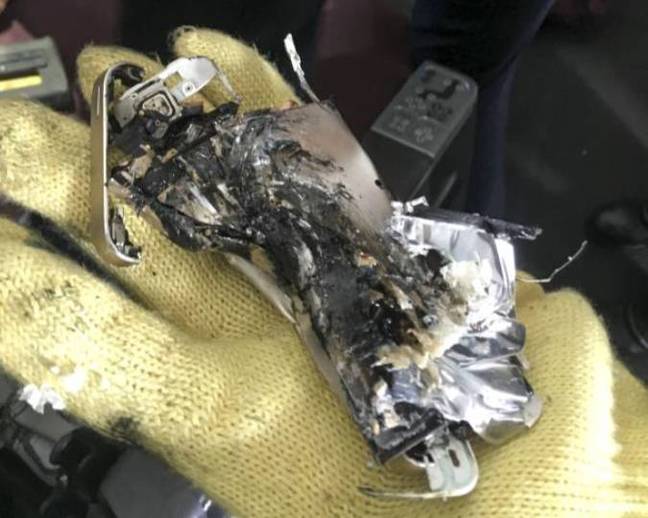 For what it is worth, the ATSB says the QANTAS crew's response to the smoking phone “provides an excellent example of an effective response to an emergency situation.” So excellent that the flight made it to Dallas as planned about two hours after the incident. ®