First set of security fixes issued for Nougat aka Android 7 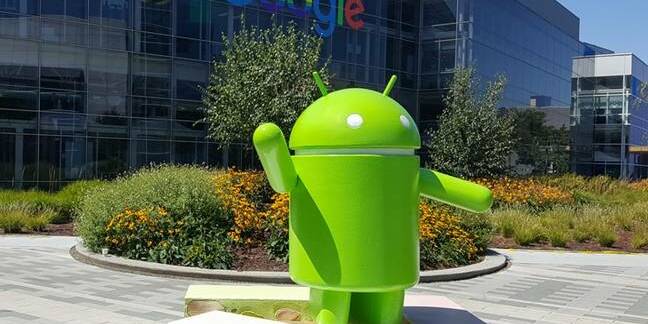 It's a smaller-than-usual Android patch bundle from Google – just 47 patches for 57 flaws.

These software bugs can be exploited by installed apps or malicious code smuggled in multimedia messages and files to gain total control of vulnerable phones, tablets, internet-connected fridges and other Android gadgets – allowing miscreants to snoop on victims and interfere with their lives.

The first bundle of 19 patches addresses application and operating system-level vulnerabilities. The second set of fixes covers driver-level holes. The third set fixes two separate issues thought to be related to the full-disk encryption shortcomings from earlier in the year.

All devices should get the first set, and some or all of the second and third batches depending on their chipsets and other hardware. If you have a Nexus, you be offered the security updates to install very soon. If not, you'll have to wait for your phone or tablet's manufacturer and mobile carrier to issue the update over-the-air, if at all.

"Partners were notified about the issues described in the bulletin on August 5, 2016 or earlier," September's advisory states. "Where applicable, source code patches for these issues will be released to the Android Open Source Project (AOSP) repository in the next 48 hours. We will revise this bulletin with the AOSP links when they are available."

The first tranche of patches mainly covers flaws found in Android's troubled Media Server, including one of the two critical fixes in the bundle and eight of the 11 high-level flaws. The other critical patch is related, as it corrects a hole in LibUtils that would allow remote code execution.

The privilege escalation bugs can be exploited by installed apps to take full control of the handheld or gadget. The remote code execution flaws can be abused by things like specially crafted multimedia text messages and files to inject malicious code onto a device, which can use one of the escalation holes to potentially gain total control.

Apps that use LibUtils to process file data can be potentially hijacked by maliciously crafted documents, and used to comprise the whole device using one of the available escalation bugs. Also, Android's builtin debugger tool can be exploited by applications to commandeer a device.

Patches for the programming blunders are available for Android 4.4.4 through to Android 7 aka Nougat. For what it's worth, Google has today blogged about some of the security defenses new to its latest mobile operating system.

The bulk of the moderate-severity patches in this first bundle deal with privilege escalation problems in the Android code. These are usually pretty harmless, unless combined with more serious flaws for advanced hacking attacks.

The second bundle, covering Android up to September 5, is the largest of the trio, with 26 patches for 30 flaws. Four of these are critical – all covering elevation of privilege attacks on the kernel – and deal with flaws in the networking and netfilter subsystems, as well as the USB and sound-handling Android zones.

Of the high-priority fixes, the vast majority are also privilege escalation problems with a variety of drivers. As with previous months, Qualcomm's kit gets a lot of patches, although Nvidia and Synaptics get one apiece.

The third patch bundle contains just two patches – one critical and one high priority – but both for the Nexus phone range. The critical patch is in kernel memory system and would allow a malicious app downloaded onto the handset to manipulate the memory and be so persistent you'd have to wipe the handset back to factory settings.

The second flaw, rated high, fixes a similar issue with the Qualcomm networking component, which would allow code execution in the kernel.

As always, Android – like other modern operating systems – has various defense mechanisms in place such as ASLR and non-executable stacks and heaps to prevent the injection of malicious code, although these are never totally bulletproof. So get patching just in case. ®