Whaddaya mean no new products? Colors are products too

Smart home poster child Nest has responded to criticism about a lack of new products by... releasing its thermostat in three new colors.

No ordinary new colors either: they are white, black and copper. Even better – they won't cost you a dime more than the existing silver thermostat.

To be fair to the company, when we pointed out to its product manager Mehul Nariyawala that putting out its lead product in new colors only heightened concerns that the company's innovation had dried up, he had an answer.

"You're right of course, the colors are just a way to please customers. What we have really been working on and where we have been spending most of our time recently is not on hardware but software," he told us.

The company's new outdoor camera that it announced in July will be available this week for $199 or $348 for two, and what Nest is most excited about – and what it feels will differentiate it in an increasingly crowded market – is its accompanying software.

Old-school security cameras typically save the footage they record onto CDs or hard drives contained in the same building. More modern cameras will save that footage in "the cloud," ie, servers that the company owns or rents elsewhere.

However if the attached systems are constantly recording, they usually require you to fast-forward through hours of footage to find something of interest. The alternative is recording based on a particular event – recording starts if there is motion or someone presses a button on, say, a doorbell.

Eyes on the prize

Nest's new system – called Sightline – improves this approach by carrying out constant intelligent processing of the images. The company explained back in July that this would allow it to give customers three different types of alerts:

The software learns to filter out persistent uninteresting motion – like a branch moving in the wind – and will flag up a person moving around in the camera's field of vision, prioritizing someone moving around in a motion area that you as the user are able to define.

It will also zoom in on and crop specific events and – if you have an Android phone – append a snap to a phone alert. When using Nest's app, you can quickly and easily scroll through the footage, with important events clustered together and easy to find.

In other words, Nest is trying to make its product work better, faster and easier for consumers. The step from having footage available to making it easy for people to find relevant material is a big one – and it's what Nest is banking its future success on. It hopes to add more features over time and increase the gap between it and competitors. 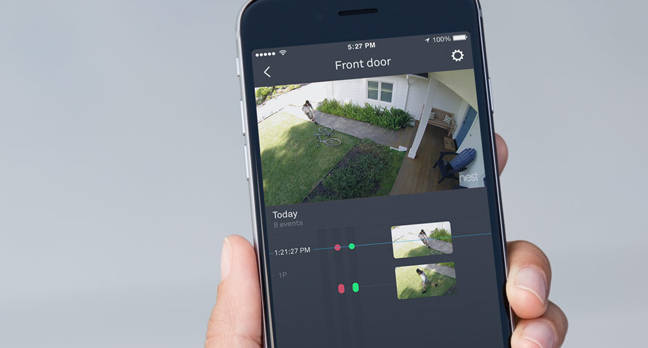 Sightline: Nest hopes its smart software will give it the edge in the market

Those services are also where the money is. The Nest camera costs $200, but it's a one-off and customers will probably not buy another for five to ten years. The video recording and smart alert service, however, will net the company $120 a year for one camera and $180 for two. That's for 10 days of archived footage. If you want a month's worth, it will cost $360 a year for one camera or $540 for two. In other words, the equivalent of another one or two cameras every year.

Those prices are nearly double what other companies currently charge, but Nest argues that if it can make the software compelling enough, people will pay it. Nariyawala told us that the cost is down to all the additional processing that the company does on the footage.

That said, Nest also recognizes that some people will baulk at high running costs. So since its announcement in July it's decided to offer a free cut-down version that will provide three hours of footage and some motion alerts, but not the more advanced features. The idea clearly is to demonstrate what the system is capable of, in the hope that more people will sign up.

This drive to make profit comes as Nest has lost some of its previous autonomy and been pulled further under the wing of its parent company Google (well, Alphabet).

With the departure of Nest's founder Tony Fadell, Nest has lost some of its autonomy. It is still on paper an independent company within Alphabet but has also been pulled into a joint IoT platform team with Google that reports to Google's Android senior VP Hiroshi Lockheimer. Does this mean that Nest will now have to follow the Google path and incorporate its standards rather than Nest's proprietary approach?

Nariyawala was diplomatic. He noted that Nest was working "much more closely" with Google since the shift earlier this year. Nest is also revamping and updating its software to work across more platforms. Pushed on whether that means Nest will now ditch its Weave protocol and adopt standards like Google's Brillo, Nariyawala was circumspect: "We are taking one step towards one another."

If the software works as demonstrated, Nest's range of products will continue to have a slight edge on the market, one that may justify the additional cost. The big question though is: what else is it working on to allow it to keep its leading smart-home status?

The company's product manager refused to give any indication: let's hope that's not because there is nothing new. ®