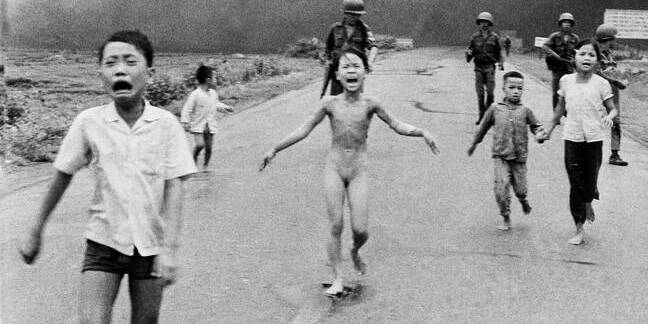 Update There's a reason why we don't put kids in charge of anything important.

Unfortunately for us, and for Facebook, the fun website where we shared pictures and updates about our lives has become much more in recent years: it is now a significant source of real world news and information for millions of people.

The young adults that run the social media giant don't seem to have realized this, as has been made clear rather dramatically by the deletion of an iconic war photograph and then the company's petulant reaction in response to being challenged. Oh, the arrogance and stupidity of youth.

There isn't a person over 35 who doesn't know the 1972 photo of nine-year-old Phan Thi Kim Phuc running away, naked, from a napalm attack during the Vietnam War. It is one of the most famous photos of all time. It shocked the conscience of millions and caused a significant shift in support for the fruitless war.

Someone at Facebook decided they couldn't tell the difference between it and an image of child abuse.

Even more amazingly, when faced with a backlash, a Facebook spokesperson actually argued their case: "While we recognize that this photo is iconic, it's difficult to create a distinction between allowing a photograph of a nude child in one instance and not others." No, it's really not.

But if that petulant, defensive attitude wasn't bad enough, it is nothing compared to what preceded it.

When Norwegian writer Tom Egeland posted the photo among six others to highlight pictures that had "changed the history of warfare," Facebook both ignored the context and the actual photo and demanded he remove it.

He, quite rightly, refused. And so Facebook reacted by suspending him. Our network, our rules.

Egeland's case was taken up by newspaper Aftenposten, which used the same photo to illustrate its article. Having failed once, Facebook's response to being challenged was classic teenager: rather than reflect on the fact that it might be wrong, it tried to force its will.

It demanded that Aftenposten "remove or pixelize" the photo. Inevitably, Aftenposten refused. And its editor, Espen Egil Hansen, wrote an open letter to Facebook CEO Mark Zuckerberg criticizing him and his organization.

At this point, any normal organization would immediately have recognized something was wrong and pushed the issue up the management chain. Maybe they did; maybe Facebook executives are equally lacking in common sense.

But what happened then shows just how much Facebook needs to grow up and review how it views its users and their use of its service.

In defense of Aftenposten, a number of Norwegian politicians including the prime minister Erna Solberg herself posted to their Facebook pages adding the image as a protest. "I appreciate the work Facebook and other media do to stop content and pictures showing abuse and violence," wrote Solberg, "but Facebook is wrong when they censor such images ... I say no to this form of censorship."