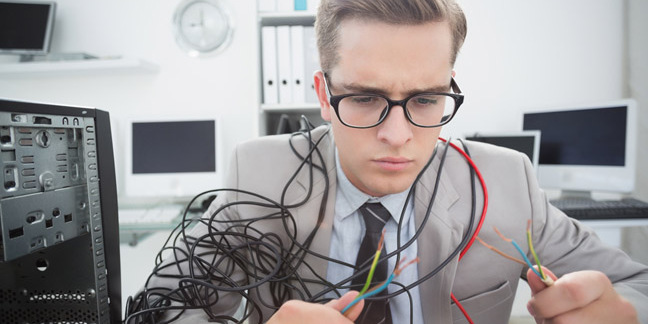 Broken cables are a possible cause of outages. I'll just wrap them around my neck then, shall I? Pic: Shutterstock

Plusnet has been slammed by its customers for failing to acknowledge or explain the cause of a nationwide broadband service outage.

Twitter is stuffed with complaints from around 7am on Friday morning that service has not been resumed following an apparent maintenance period.

Plusnet’s service has been struck down across the country, with popular outage tracker Down Detector showing reported problems in London, Liverpool, Leeds, Manchester Bristol, Oxford, Cardiff and Plymouth.

The service provider coughed to the problem at around 10am in a tweet:

We know some of you are having problems, we’re doing our best to get this sorted ASAP and we will let you know once we have an update ^MC

That was followed at 11.15 am with an update that “some” customers were experiencing packet loss.

For irate customers, though, it was too little too late from a company whose slogan is “we’ll do you proud” and which has won awards for its customer service:

@Plusnet @plusnethelp I understand maintenance sometimes overruns but the lack of information is disgraceful. 😠

Plusnet update your customers on your web site and social media that you have an issue!! @Plusnet #plusnet

@plusnet @plusnethelp come on you lot, you have had a major problem since 7am and you have left your customers without any info whatsoever.

Affected customers will be able to view their bills. Rejoice!

If that were the case, you might actually Do Us Proud

ISP claims voiceover bloke read without being digitally sped up

You can check out any time you like, but you can never leave

Hitches ride on BT's EE network – but can they do it better than they do broadband?