Other nations' crackers deal in code only, but in France things are seriously nasty

Videos of the home-made pen guns scattered around the internet show the weapons in working use.

The guns are being sold for €150 (US$169, £127, A$226) alongside other concealed weapons like knuckle dusters and knives, and more expensive conventional large firearms.

Trend Micro's Pernet made the discovery while researching on French hacking forums for the security company's series of global regional analysis of criminal hacker scenes published over the last year and covered by El Reg.

Pernet finds the concealed weapons are unique to the French crime forums, along with euthanasia kits, and bank account registration services which help criminals outsource the tremendous risk stemming from France's requirement that accounts be opened in person at branches.

French criminals are also willing to cop traffic infringement demerit points and have their details put down as a nominated driver, for a price.

The hallmark of the French crime sites, however, is an exceptionally high levels of identity vetting. 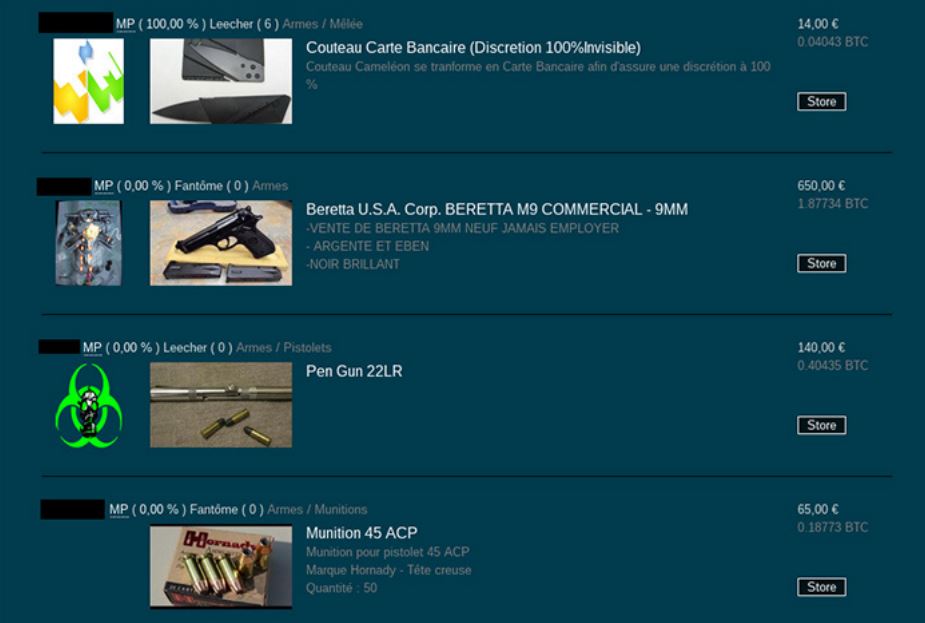 Pernet says the criminal underground in France is seeded with suspicion making life harder for new hacker entrants than any other regional online crime scene.

France is, Pernet says, the "alter ego" of the United States where any hacker can join barely-secured crime forums crawling with scammers and police.

The French hide their marketplaces in the dark web, enforce mandatory five percent commission escrow payments to minimise scam transactions and operate "rampant" halls of shame in which scammers are tarred and feathered.

Pernet says a respectively small community of some 40,000 hackers operate in the French-speaking crime forums, bagging between €5 million to €10 million a month.

"Overall, the French underground is a small market that caters more to niche requirements for committing fraud against the French-speaking victim base," Pernet says in the The French Underground: Under a Shroud of Extreme Caution [PDF]

"It operates under a shroud of caution.

"Its players are not only wary of law enforcement agencies that implement stringent cybercrime laws, but even of players who may be working with the former."

Many French criminals operate their own sites, dubbed "autoshops", where sellers market direct on the dark web. These run alongside the large identity-vetted crime forums common in Russian-and-English-speaking forums. ®