Rise of the Machines at Sea: The British firm building robot boats

RotM As the pace of automation gathers speed – from the Internet of Things to factory floors – there's a lot going on quietly but efficiently in robot boats, in particular, with Portchester-based ASV Global.

Founded in 1998 "as an idea", ASV – which stands for Autonomous Surface Vehicles – took off in 2007 after winning a research and development contract with the Defence Science and Technical Laboratory (DSTL). The 70-strong company builds robot boats for the British military, other defence contractors and commercial customers alike.

He characterises ASV's boats as having a “high level of automation” – but the potential is clearly there for true autonomous operation.

ASV mainly produces what Hook calls “force multipliers”. Imagine a ship surveying a stretch of coastline. To obtain accurate data about the seabed, the ship has to physically sail up and down over all of the area that needs to be covered, which takes time and costs money.

With a robot boat operating off each flank, also scanning the seabed and recording data, the mother ship can achieve far more in the same time period. Hook said using ASV's robot boats reduces costs for their customers, enabling the same work to be done faster and more cheaply.

James Cowles, a product manager at ASV who is responsible for their science and survey products, explained one of the firm's current deployments in the Gulf of Mexico: “There is a large oil supply vessel which is going out and placing acoustic transponders on the seabed. Then we have a vehicle out there which is positioning those transponders, going around them in a circle, measuring the position of the vehicle through the GPS system and measuring the position of the transponders using sound.”

“What they'd normally do is use a large 100-metre ship to do that which costs anything up to $150,000 dollars a day, doing a very low-value task,” said Cowles. “Essential, but low-value. If you can do two things simultaneously, tracing those transponders and also positioning them at the same time, you can save a lot of money.”

Getting on with the job

“There's different levels of automation,” Hook said, spelling out the difference between true AI autonomy and what he calls “tele-operation”, which is where a human directly controls the robot boat during launch and recovery. Otherwise the boats are mostly programmed to go out and do their jobs without needing direct human supervision.

Those jobs include surveys of anything from shallow rivers to the open ocean, hunting down mines and other old wartime explosives, and acting as a communications relay station for a remotely operated underwater vehicle (ROV) – or even being used as a target drone (a “splash target”, in the naval lingo) for the Royal Navy.

ASV's robotic splash targets are built from aluminium for ease of repair. Most of their target drones are small battleship grey craft of about five metres' length. They are not overly complex – ASV designs and builds its own hulls – and there is ample room aboard for the control gear.

Not quite full AI just yet

ASV is working steadily towards true artificial intelligence (AI) on its boats, though for safety and regulatory reasons there is always a human supervising them, either out in a safety boat next to the robot vessel or overseeing its operations.

“What we find is that all operations require different levels of autonomy at different stages of the operation,” said Hook. “A lot of them require a man in the loop at low levels of autonomy – we call it teleoperation. Say, at the beginning or end of the mission, launch and recovery or navigating in busy areas of water, there's generally a person in direct control.”

The human operator's controller looks just like you'd expect: a large remote control unit designed to survive contact with the roughest and toughest that Mother Nature – and Her Majesty's sailors – can dish out.

Cowles said: “We've got real-time updates from the vehicle itself and that's giving us indications of what's going on in the area so you have a forward looking camera which will tell you if it sees anything, and you have AIS [Automatic Identification System, a beacon that broadcasts a ship's location].

“If you're far offshore you can be reasonably confident you're not going to have recreational vehicles out there,” he continued. “If it's going to be a commercial vehicle [approaching] you have a safe method of understanding the sea around you. The other thing is, we're moving relatively slowly, doing three or four knots, as opposed to other applications where we might be doing 15 or 20 knots.”

Data and the movement thereof

With robots replacing manned vessels, the potential for collecting and exploiting volumes of data is readily apparent. Yet not all tasks involve beaming full datasets to and from the boats.

“Most of the operations we're working on don't need the full set of data in real time,” said Cowles. “Multi-beam surveys – which is using a specialist transponder which uses up to 512 beams of sound into the seabed – that's producing gigabytes of data. For example, we don't use anything on the vessels to collect data that's got less than a terabyte of hard drive space.”

So how is all that data beamed back to the shore station or mothership, given the limited size of the boats?

“You need to have access to the processing system on board the vehicle so you can see the data coming in is good, and valid,” explained Cowles, “but you don't need all of the data. You can use it for a remote desktop connection, which is what we normally do, and then use standard acquisition packages on the vehicles which you can then monitor.”

All of ASV's boats carry at least 1TB of flash storage – particularly the survey vessels, given the gigabytes of data that a multi-beam sonar system can generate very quickly. While Cowles wouldn't be drawn on specifics, he did say they were moving towards using commercial off-the-shelf storage, usually in a RAID array.

Can these boats actually sail themselves, though?

While tele-operation is all well and good, given the regulation – or potential lack of – the future clearly lies in truly autonomous vessels. Can ASV's products actually be told “go out and do this” and be left to get on with it, on a technical level?

Steve Davenport, head of project delivery, said: “The technology is there at the moment that we could take one of our unmanned vehicles, put a few people in the office downstairs and navigate the whole thing around Britain but we wouldn't do that – we don't have enough of a case history to do that.” 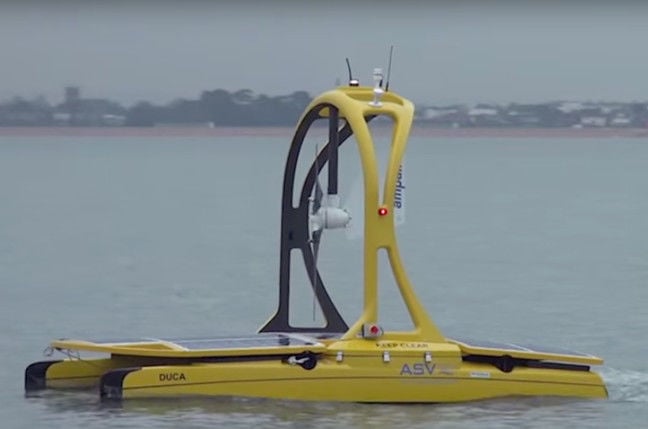 ASV Global C-Enduro robot boat. The fan is actually a wind turbine to power the electrics

ASV is keen on its “case history”, building a rapport with the authorities and establishing itself as a competent operator with a solid track record of doing things safely.

“We have our software team in ASV working on collision avoidance and various other ways of how they can regulate speed according to environmental conditions, so the capabilities of the boat are going to be there before the legislation arrives,” continued Davenport. “It's just a case of how do we integrate that, and the best way that we can do it is to be safe as possible until that point and to do things in a very responsible way.”

Rise of the Machines? Not just yet

There are “efficiencies” to be gained from replacing large ships with autonomous vessels, as Hook says. Naturally, though, there is the big question of job replacement. If ships can be replaced by inexpensive robot boats – particularly for dangerous tasks such as naval mine clearance – will that not put a large number of human sailors out of work?

“There are benefits of having a human operator – but there are efficiency gains in using autonomous vehicles too,” said Hook. ASV's military customers tend to be looking at tasks such as “minehunting and anti-piracy”, where removing humans from the boat itself – ”getting people away from danger”– is a priority.

Similarly, scientific research expeditions tend to be doing things such as “studying glaciers in the Antarctic, particularly their undersides”, in Hook's words, where it is risky to put humans into that position for a long period of time.

As Davenport summed it up: “Unmanned boats are still very much a new thing.” While the Ministry of Defence is running a competition for 40 separate autonomous systems – Exercise Unmanned Warrior – next month, which will feature a number of SMEs such as ASV, as well as the usual big defence contractors, the field is still new and developing.

Could a robot boat sail around Britain? “That's the long term ambition,” said Davenport, “but whether we actually get to that point, who knows? We hope so.” ®