The charge is being led by Dell-EMC’s DSSD unit and startups such as Mangstor and Apeiron, shipping product that offers shared array data access at speeds hitherto unbelievably unattainable except from server-attached PCIe-flash drives.

A G2M NVM Express (NVMe) Ecosystem Market Sizing Report shows the state of the market now and just how fast it has been developing. Soon all external arrays with ambitions for storing tier 1 fast access performance data, will likely have to use NVMe flash drives (or faster media drives; think XPoint-class) and NVMe over Fabrics (or accelerated Ethernet) network access or else face being replaced by arrays that do.

Our feeling is that we are looking at a mass transition in the 2017-20-18 period with installed base migration from 2017 to 2020 and beyond. This could provide a great fillip for on-premises array vendors as performance data storage in the cloud cannot provide equivalent performance unless the apps run in the cloud and similar storage hardware/software is used. 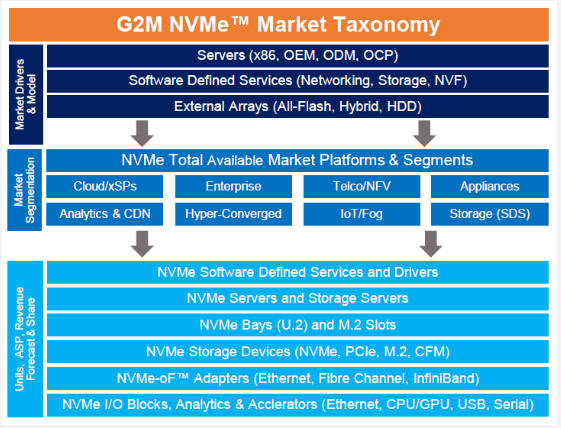 Shaun Walsh, president and managing partner at G2M Inc., says: “We expect the NVMe market to be more than $57bn by 2020 with a 95 percent compounded annual growth rate.”

Get a copy of the report abstract here. (PDF)

El Reg sees some 17 suppliers already in or set on entering the NVMe over fabrics (NVMeF) storage array market. They can be grouped into five classes: 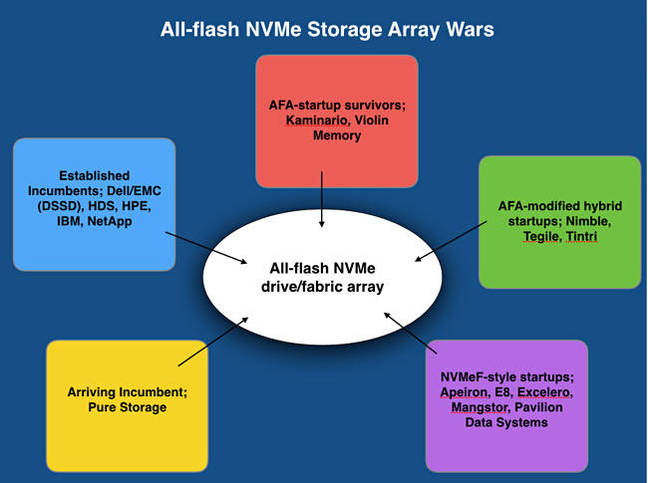 Oracle should also be classed as an established incumbent and, we suggest, will not be left behind in performance data access by NVMe arrays. It may focus on NMVe fabric access over InfiniBand.

We should also note Chinese system/storage vendors in the wings, meaning Huawei and Lenovo. Then there are other startup, niche and minor array vendors to consider such as DataDirect Networks, Fujitsu, Infinidat, Nexsan, Panasas, and Seagate with ClusterStore.

For all the vendors, NVMe over fabrics technology gives them a shot at building and taking sales from no-NVMeF incumbents. It gives a fresh lease of life to ailing and struggling players, equalising the playing field to some extent.

It could be possible that HPC storage access will start using NVMe drives and fabric as well, which is why DDN, Panasas and Seagate are in the list above.

Tegile CMO Narayan Venkat thinks that NVMe fabrics will be the great equaliser between hyper-converged infrastructure (HCI) systems such as those from Nutanix and SimpliVity, and external arrays. With storage admin being subsumed into system admin, via technologies such as VVOLs, then storage management simplicity equivalence between HCI and shared array systems is effectively achieved.

We’d point out that multi-node HCI systems will spend more resources on inter-system messaging to ensure a single version of the virtual array stored truth as more nodes are added. With a shared array this need to co-ordinate servers with their own portions of the virtual array disappears.

A further point; with DAS PCIe flash access speeds from a shared array then data locality needs, sometimes touted by HCI vendors saying compute and storage for apps on that compute need to be located close together, goes away. All the data on the shared NVMe fabrics array is effectively local to all servers connected with it over an NVMeF-class link.

Consider composable infrastructure too, with racks full of compute, networking and storage shelves, all dynamically put together onto systems as needs dictate - think HPE Synergy - then, at a gross level, a rack of servers, network switches and storage shelves will be common between trad systems, converged systems and HCI systems. All that will differ will be the software organisation and buying process.

NVMe over fabrics access to NVMe drive arrays seems almost certain to be the external array future for storing performance data. As applications, middleware and operating systems are developed to take advantage of it then today’s IO-bound apps will lose that constraint and face a balance if being both IO- and CPU-bound instead, while the servers operate at hitherto unachievable levels of efficiency and applications run faster and do more.

The public cloud will not be able to compete unless both apps and data are cloud-resident and run in hardware and software environments offering similar performance levels.. NVMe drives and fabrics offer a great opportunity to on-premises IT system and storage vendors, and to users, to turbo-charge existing systems and make them go a hell of a lot faster. We’ll drink to that. ®