What? It's what NASA said - what are you thinking of?

Pics and video Images from the Hubble Space Telescope of Jupiter's most intriguing moon, Europa, appear to show plumes of water being ejected from the surface into space.

The telescope took a series of ten shots of Europa over 15 months in the last two years as it passed in front of Jupiter, using the reflected light from the gas giant to get spectrographic images of the small moon.

Three of them showed plumes of fluid 125 miles high blasting from the moon's southern pole.

"Europa's ocean is considered to be one of the most promising places that could potentially harbor life in the solar system," said Geoff Yoder, acting associate administrator for NASA's Science Mission Directorate.

"These plumes, if they do indeed exist, may provide another way to sample Europa's subsurface." 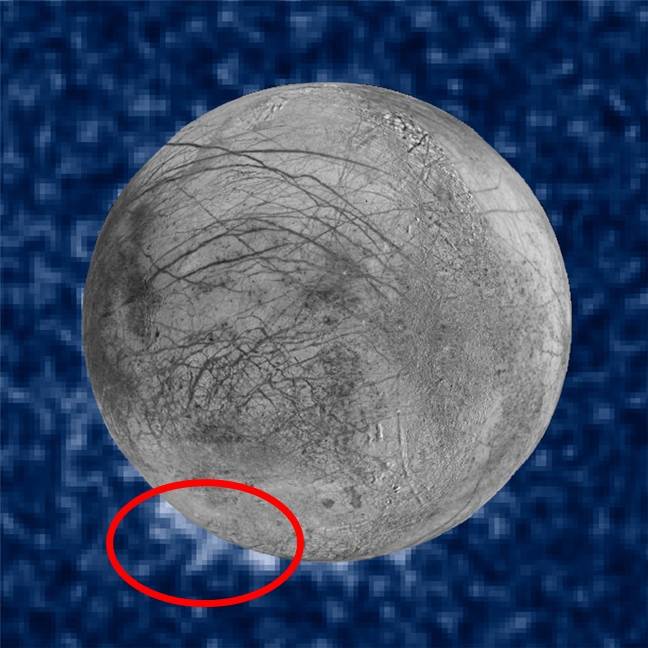 The plumes appear near the southern pole of Europa

Astronomers first spotted what they thought was a 100-mile high plume of hydrogen and oxygen on Europa in 2012, but the sight was never repeated

Now we have more solid evidence that the moon is indeed spurting fluids from its surface. William Sparks, astronomer with the Space Telescope Science Institute in Baltimore, said in today's press conference that there appears to be no other natural explanation for the sighting. 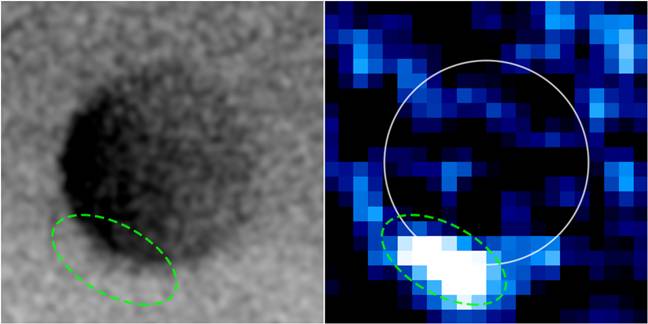 Europa has long intrigued astronomers, since it appears to have a large undersea ocean covered in a broken crust of ice. Tidal forces from Jupiter could provide heat at the core of the moon, and this makes Europa one of the most likely candidates for extraterrestrial life in our solar system.

"For a long time, humanity has been wondering if there is life on other places than earth," said Paul Hertz, director of the Astrophysics Division in the Science Mission Directorate at NASA. "On earth, life is found wherever there is water, energy and nutrients. Europa might be just such a place."

The ice covering the moon is thought to be miles thick, so the scientists aren't sure how they could have erupted. One possibility is that tidal forces on the planet might be able to crack the ice, but that is thought unlikely. Another possibility is impact sites on the moon breaking up the crust enough for water to escape.

The plumes are important because they could make examining Europa's buried oceans for signs of life much easier. NASA is already working on a Europa mission, but it's difficult to get readings through miles of ice.

One (now scrapped) suggestion is building a lander with a radioactive heating element, which would slowly melt the ice and allow for a probe to sink down eventually into the oceans. But it would be a massive engineering challenge, and if plumes are quite common, a probe orbiting the moon could sample them without even needing to land.

The current mission plan for a Europa flyby has the probe carrying nine instruments, all of which could be used to analyze plumes of material. No firm date, or firm funding, has been set for a Europa mission as yet.

Europa isn't just interesting because it might harbor life – indeed it might cause ethical problems if it did, because Europa interests some as a solar system refueling station, where spaceships could top up their tanks with easily accessed hydrogen and oxygen fuel. But if life is found, it would put Europa off limits for refueling.

We won't know, of course, what is in the ocean until we go and check it out. Legendary science fiction author Arthur C Clarke postulated that life existed on the moon and that alien life would keep mankind away with the warning "All these worlds are yours, except Europa. Attempt no landing there. Use them together. Use them in peace."

If NASA's evidence is right we now might not need to land after all. ®