This follows on from the E-Series launch of the entry-level all-flash and hybrid flash/disk E2800 (PDF) earlier this month, aimed at midsized businesses and remote offices. That has a pay-as-you-grow scheme for adding capacity. Sunnyvale claimed that the E2800 offers best-in-class performance - up to 300,000 IOPS - at the lowest acquisition cost for an all-flash array.

There are six new mainstream NetApp arrays and we'll start with the AFF flash fliers.

The two new AFF arrays use Samsung’s 15TB SSDs, which provide a 4x capacity increase at the entry and old mid-range levels. We understand that the A300 replaces the AFF8040 and AFF8060 with the AFF700 replacing the AFF8080 EX.

All these systems scale up but are built to scale-out with clustering from 2 to 24 AFF and/or FAS nodes.

ONTAP, the AFF and FAS operating system, gets a refresh to v9.1 which offers:

ONTAP v9 is available as a base bundle and a premium bundle (FlexClone, SnapMirror, SnapVault, SnapRestore, SnapCenter and SnapManager) with separate optional software; OnCommand, SnapLock and FlexArray virtualisation of third-party storage.

We have the new AFF A300 mid-range and AFF A700 high-end system with configuration flexibility through a modular design. This is said to ease servicing and prepare the way for future upgrades. These systems deliver up to twice the performance at half the latency, compared with the previous generation of AFF systems, with setup in under 10 minutes. A 24-node AFF cluster can deliver more than 7 million IOPS.

NetApp points out that its AFF line uses Samsung 3D V-NAND and is the first all-flash array to support (Samsung) 15TB SSDs. These two AFF boxes are also the first to use multi-stream write (MSW) SSDs, which improve SSD write performance and SSD endurance through better garbage collection techniques.

The AFF8060 also came with dual enclosure HA: 2 controllers and 2 IOXMs in two 6U chassis for a total of 12U.

“However, garbage collection processing decreases both SSD read and write performance. In addition, garbage collection increases write amplification because individual host data write requests can result in multiple internal SSD writes to the NAND medium. Here, valid data is first read from a media block about to be erased, then rewritten to another media storage block, accompanied by the write to store new host data. Consequently, write amplification decreases SSD lifetime because each NAND chip can endure a certain number of writes before it begins to fail.”

MSW sidesteps this: "Streams are host hints that indicate when data writes are associated with one another or have a similar lifetime. That is, a group of individual data writes are a collective stream and each stream is given a stream ID. Because the data within an erase block has a similar lifetime or is associated with one another, there is a greater chance that an entire erase block is freed when data is deleted by a host system.

“A multi-stream SSD improves Write throughput up to 9x over a legacy SSD [and] the ... endurance can potentially be more than 3x of a legacy SSD.” Neat.

MSW is implemented in Samsung’s PM953S NVMe SSD, by the way.

The FAS2600 range has up to 3x the performance of the previous FAS2500 generation. There are two systems: 2620 and 2650, which are quite similar. Both scale up to 144 drives (the same maximum as the FAS2500), 1TB of NVMe Flash Cache, 64GB of ECC memory, 8GB of NVRAM (4GB before) and a 24TB Flash Pool (16TB before). They can have up to eight unified target adapters (UTA 2s - IO ports) and four 10GbitE ports, both of which can also be used for cluster interconnectivity.

The 2650 is equipped for higher performance needs, suitable for mid-size businesses and distributed sites of larger organisations, Windows applications and virtual server consolidation with multiple workloads.

Users can convert their FAS2650 and FAS2620 systems to an external disk shelf if they upgrade to larger NetApp systems.

The FAS8200 is a larger beast with up to 50 per cent more performance than the prior generation:

The new FAS9000 has a modular design and scales up to up to 14PB in a system and out to 172PB in a cluster, virtually the same cluster maximum as the current FAS8080 EX, which scales up to 11.5PB in a single system. As with the A700 the modular design is said to simplify servicing and enable simplified future upgrades. 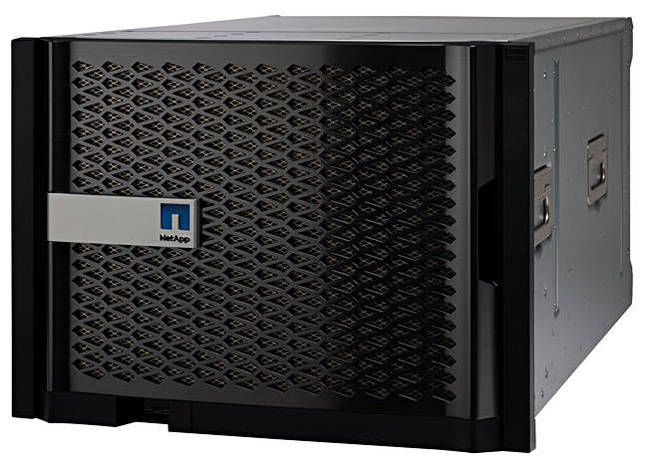 Its maximum capacity is three times higher than the FAS8200’s and it boasts more memory, NVRAM, and a larger Flash Pool:

NetApp says the FAS9000 has 20 expansion slots to support 12Gbit/s SAS, 40GbitE, and 32Gbit/s FC IO, as well as 10GbitE and flexible 4-port UTA2 adapters for both Ethernet and FC connectivity.

This across the board major FAS/AFF/ONTAP news represents a solid refresh of NetApp's core product range. It should please FAS adherents as well as helping to continue NetApp's flash resurgence with much more capacious and performant A300 and A700 systems.

Pricing is not yet available. All the new systems will ship in the final 2016 quarter. ®