Before I dive into what's new in Ubuntu 16.10, called Yakkety Yak, let's just get this sentence out of the way: Ubuntu 16.10 will not feature Unity 8 or the new Mir display server.

I believe that's the seventh time I've written that since Unity 8 was announced and here we are on the second beta for 16.10.

Maybe that's why they named it Unity 8. Whatever the case, Unity 8 is available for testing if you'd like to try it. So far I haven't managed to get it working on any of the hardware I use, which goes a long way to explaining why it's not part of Ubuntu proper yet.

Unfortunately, without Unity 8 and the accompanying Mir display server there's not much to get excited about in Ubuntu 16.10 – or, at least, the main Unity-based desktop version of Ubuntu. There are some great releases coming from various Ubuntu flavors, notably Ubuntu MATE which will feature the hot off the press MATE 1.6.

The first things you'll notice in this beta is that if you decide to grab a copy of the 16.10 beta is that the installation disk is considerably larger than it used to be. It could be argued that keeping the ISO down to CD size is an arbitrary limit which, given that CD drives appear to be on their way out, is no longer necessary. But my internet connection has not become any faster since 16.04 and frankly the larger download makes getting Ubuntu that much more difficult - particularly in places where download speeds are not what they are in the west.

Whatever the case, the change appears to be permanent, so chuck your CDs and brew an extra cup of coffee, downloading Ubuntu is going to take a bit longer than it used to.

Once downloaded and installed the first thing that jumps out at you is that Ubuntu 16.10 looks just like the last seven releases. Unity 7 remains the default and it has only seen the barest of updates --bug fixes and security patches only. To find something new in this release you'll have to go spelunking into Ubuntu's set of default applications.

The most welcome improvements in the default applications come in the new Ubuntu Software app, which made its debut with this spring's Ubuntu 16.04 release. Among the improvements in 16.10 Software are improved support for Snap packages as well as support for a variety of things that used to fall outside what Software handled. For example, Software will now track and install non-GUI apps, libraries and fonts alongside your "regular" applications. Software is also noticeably faster when browsing for applications. 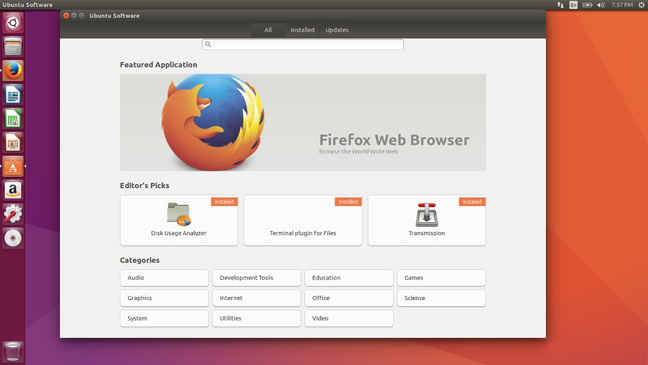 It's the Snap package improvements that are most exciting for users who want to keep up with the latest and greatest. For the uninitiated, Snap packages are self-contained packages that include all of their dependencies. This has two advantages over traditional packages, which pull their dependencies from the system. First it makes it easy to install two applications that depend on different versions of the same dependency since each Snap already contains everything it needs. This is huge win for Ubuntu given how out of date some of the its GNOME packages are. The other big advantage is that it's easier and safer to update your userland software. Which is to say, you can have your LTS release and get your latest and greatest application updates too. Because there's no danger of pulling upgrades that mess up the rest of your system, you can always have the latest software without having to run the bleeding edge of the actual system software.

The problem with Snap packages in Ubuntu 16.04 is that there aren't very many of them and installing them is a bit of a pain. This release does smooth over some of the rough edges and makes installation a bit easier.

It's tough to find reasons to recommend you upgrade to 16.10. If some application you rely on isn't working with 16.04, especially something with GNOME dependencies beyond the outdated versions of GNOME software that 16.04 offered, then 16.10 might be worth a look - most applications in this release will be from GNOME 3.22. ®