Yes, let computers off the leash with unsupervised learning

Unsupervised learning is a problem Yann LeCun, Facebook’s AI guru, really wants to crack. It promises to lead researchers to a next generation of AI – one where machines have higher intelligence and can perceive the world and act accordingly – something we call common sense.

Talking to the crowd at the O’Reilly Artificial Intelligence conference on Monday, LeCun celebrated deep learning. The technique has led to Facebook creating DeepMask+SharpMask, an open-source software that uses AI to recognize objects in images.

“Facebook receives between one to one and a half billion photos from users every day,” LeCun said.

“Within two seconds, the images go through two convolutional neural nets. One detects objects and the second recognizes people so you can tag them.”

That’s impressive, but machines need to learn a lot of background knowledge during the training phase before they can perform well. The training data has to be spoon-fed to the machine bit by bit and most learning is supervised. 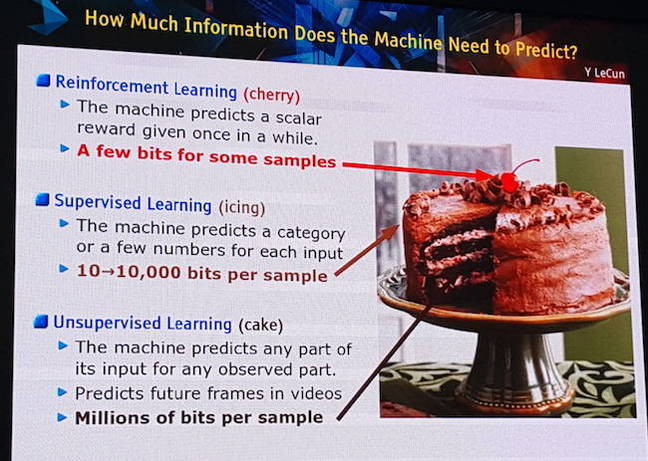 You need to feed a lot of information – 10 to 10,000 bits per sample – into the machine for it to make sense of the data and make crude predictions. But for real progression in AI, the machine should be able to predict any part of its input from what it has observed, such as being able to predict future frames in videos based on the sequences of actions it has seen before.

That type of learning is unsupervised and requires at least 100 times more computing power than supervised learning at millions of bits per sample.

Current AI models are able to recognize the world, but have trouble reasoning and planning. To build a truly intelligent machine with common sense, it must be able to perceive the world, plan, reason, and make accurate predictions so it can act accordingly based on all the knowledge it holds in its memory.

LeCun is determined to find unsupervised learning algorithms that can be used for visual recognition. Not only is this good for Facebook – it’ll help researchers build more intelligent machines, and maybe a deeper understanding of human intelligence and the underlying mechanisms of learning.

But until then, AI will only continue performing well at specific tasks, keeping general AI firmly locked in science fiction. ®