More imminent: Heat death of the universe – or Big Red giving up appeals? 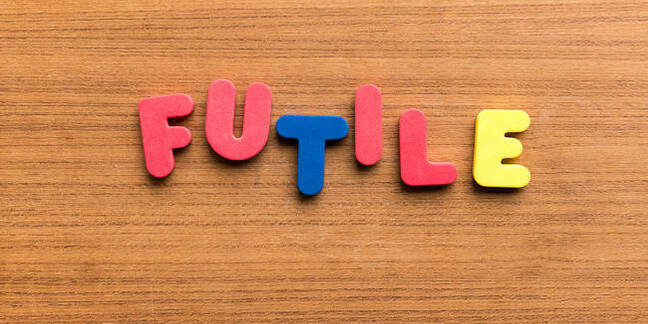 Oracle has been turned away in its latest effort to get a new trial for its Java API copyright claim against Google.

San Francisco District Court Judge William Alsup denied [PDF] Oracle's latest motion to have the case reheard, this time on grounds of misconduct on the part of Google's lawyers.

The legal war, which has been tied up in various phases since 2010, was ultimately decided in Google's favor and has since been appealed by Oracle multiple times.

In this latest effort, Oracle had accused Google's legal team of failing to disclose the Chocolate Factory's intent to develop tools to run Android on the desktop via the Android App Runtime for Chrome (ARC).

This, Oracle charged, would have nullified Google's contention that its use of Java APIs was limited to mobile devices and could be considered fair use, as its code did not compete with Oracle's own software.

Alsup, however, shot down that argument, denying Oracle's motion. The judge reasoned that Oracle and Google had agreed that in this specific case, the focus was only to be on the smartphone and tablet implementations of Android.

"It may well be true that the use of the copyrighted APIs in ARC++ (or any other later use) will not qualify as a fair use, but that will not and does not mean that Google's argument on transformative use as to the original uses on trial (smartphones and tablets) was improper," the judge wrote.

"That Oracle failed to detect the ARC++ documents in its possession had no consequence within the defined scope of our trial."

Additionally, Alsup argues, Oracle is picking and choosing what important data in the case should be added and what should be omitted. He notes that while the ARC++ information could help Oracle's claim, another document left out of the original trial would have backed up Google's side of the story by showing that Oracle/Sun offered an open Java API years earlier.

"Sun itself had given away Java (including all of the lines of code in suit) in 2008 via its open-source OpenJDK. In 2015, Google used OpenJDK to reimplement the Java APIs for the latest release of Android, which it called Nougat," Alsup pointed out.

"Google wished to use this evidence under the fourth fair use factor to show that its infringement did no more market harm than Sun itself had already invited via its own OpenJDK release."

Oracle and Google declined to comment on the ruling. ®

Big Red makes its case to America's highest court that... there's no case to hear