Pics + vids Construction has now started on the Giant Magellan Telescope – which will be the world's largest optical viewing device mankind has ever built – using record-breaking mirrors and advanced electronics.

The telescope, located high in the Chilean mountains, will be able to show us images with up to ten times the resolution of the Hubble Space Telescope. With it we hope to actually see exoplanets for the first time, as well as focus in on closer objects in our own solar system.

Dr Patrick McCarthy was part of the Hubble Space Telescope’s Wide Field Camera 3 science team, and has done pioneering research into the formation of early galaxies. He has an office at the Carnegie Observatories, next door to Einstein's old room and one floor above Edwin Hubble’s, as director of the Giant Magellan stargazing machine.

The Reg caught up with him after a science conference in California for an exclusive chat to find out how one of the greatest scientific instruments of our time is coming along and what we'll be able to do with it.

How can a ground-based telescope get images that are many times better than a space-based platform like Hubble?

The temperature and density of the atmosphere isn't uniform, so it's like when you see light coming through a swimming pool – it shimmers into bright and dark spots. So the key advance is adaptive optics. You make part of your telescope flexible, like a rubber mirror that changes shape all the time to cancel out the effects of the atmosphere.

It's the same kind of thing you see in noise-cancelling headphones, but wavelengths in light are so much smaller than the wavelength of sound, which makes it tricky. But it's now done regularly and the technology is still advancing.

If the mirrors are going to flex they presumably are very thin and fragile.

Well, there's two kinds of mirrors. There's the big mirrors, shaped kind of like a bowl, and they are very thick and stiff. They are about 85 per cent hollow and lightweight and extremely rigid – you can stand and jump on them and you won't do anything to them.

Up above there are the smaller mirrors, but they are only two millimetres thin. This makes them extremely difficult to handle without breaking them. Once installed they will be moved and bent at a very high frequency by magnetic coils; that's what takes out the effect of the atmosphere.

They also move up and down a little bit to adjust focus. They are the tricky ones for handling, so we'll send those down by airplane and the thicker mirrors will be transported by boat.

Has the CCD sensor technology used in this telescope improved at a similar pace?

Standard CCDs have now improved to the point where they are almost as good as they are going to get. They can detect almost 100 per cent of the light, they have virtually no noise, and you can make them in very large formats.

But CCDs are silicon and stop collecting light at about 1.2 microns. We'd really like to get out there in the infrared, so we use different semiconductors – mercury, cadmium and telluride, or indium, selenium and arsenic. Those devices are still very expensive, they don't have quite the efficiency, and they are very difficult to make, so we've got a ways to go on that. 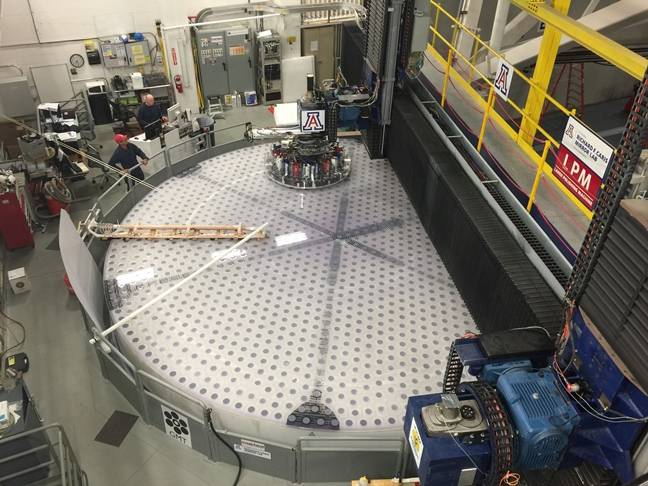 Grinding the first mirrors for the Giant Magellan Telescope

Hubble was at first plagued with mirror problems. How confident are you that the Giant Magellan Telescope mirrors are sound?

We're completely confident. We've done it for the first mirror and done it for other mirrors that are almost as difficult. We know we can make them, it's really a question of how long it takes. In almost all telescopes the optics are the hardest part to get right, and that's why we won't be fully operational until about 2024. Some things you can't rush if you want to get them right.

So how many mirrors would you need to have in place before it becomes operational?

The astronomers will want to get it going with just one mirror, but we view the real challenge as making two mirrors talk to each other, be aligned and come to a common focus. But the current schedule means the telescope will be ready to take mirrors when we have four of them in Chile.

My guess is we'll get four mirrors in before going operational, then the next year get the fifth mirror, with the sixth and seventh mirrors coming a year later and go from there. That's the schedule now, but there's always some uncertainty there.

Shipping these mirrors to the top of a Chilean mountain must be a complex job.

Not complex so much as nerve-wracking.

We build a special steel box so that it's shockproof and no water can get in, and so that the mirror is protected in case anything falls on the container. Inside, the mirror rests on a series of shock absorbers to make sure that if it moves around it does so slowly. Then we put in accelerometers so we can measure movements inside and radio transmitters to send that data out while it is transported.

It's very possible, having eight mirrors to ship, that we'll do a dry run and just ship the box with the electronics in it and go through the whole process just to make sure that everything goes smoothly.