What are the key goals of the project?

In the big context we want to know what the universe is made out of, its geometry, what it's filled with, what's our place in the universe, how did it all evolve, and are there other life forms out there.

The way we approach it from a technical point of view is often very specialized. Of the three big telescopes being planned on the ground – the EU's Extremely Large Telescope, also in Chile, and the Thirty Meter Telescope on Mauna Kea, Hawaii – each has its particular strengths.

At our meeting this week it was remarkable – there were people there from all three projects and we agreed that Giant Magellan Telescope may be the best telescope for taking images of other planets. It'll be the first telescope that will see Proxima Centauri b, the Earth twin planet discovered last month – actually see it as opposed to detecting it indirectly. When it comes to discovering cosmology and the wider universe, we will have the widest view of the sky of the three telescopes.

The European instrument will be really great at taking things apart in super fine detail, so it can look at a galaxy and dissect it, measuring the mass of its black hole and individual stars. It'll really be outstanding at that. Then if you want absolute raw sensitivity in the infrared, the James Webb telescope is above the atmosphere and cold – I mean really cold. That makes it fantastic for the infrared.

It's like having a toolkit, you want to use different tools to attack the same problem at different times, and we think we have the Swiss Army knife of tools. It can do a lot of different things.

So what level of resolution can you get on exoplanets?

Once you can separate the light of the planet from the star, you can look at its color and see how that color changes over time. If you took an image of the Earth and blurred it so that all you saw was the unresolved surface, you'd see color changes as the cloud cover changes, as the continents come into view, as you see the oceans.

One thing we are learning from planets we can see is that clouds are pretty common. Clouds change, colors change, some are very hazy like Venus and in others the clouds are clear and you can see down to the surface features. When we can start to do that on planets that are like Earth rather than like Jupiter, you can ask do they have water, clouds, weather or continents. It opens up a bunch of new possibilities.

Could we use the telescope to look at stuff closer to home, within our own solar system?

Oh yes, we'll make images that are perhaps not quite as sharp as a spacecraft doing a flyby, but you've seen those beautiful Hubble pictures of Jupiter and Saturn. Now imagine those ten times sharper. One of our requirements is that we can track things in the Solar System that move. It turns out our adaptive optics guy is really a planetary science guy, that's his passion.

So for astronomers how is time going to be allocated on the telescope?

Very carefully. I expect we'd get about ten applications for every one period of use, ten good proposals for every hour of time. The very best proposals will get selected via peer review, but we have to recognize that the people that put the money in for the telescope have first dibs on its time.

The biggest challenge we have had in construction so far is that the ground rock is a little harder than we thought, so we had to use a little more explosives here and there. But Chile is extremely welcoming to astronomy – they set up a very friendly tax and regulatory environment. 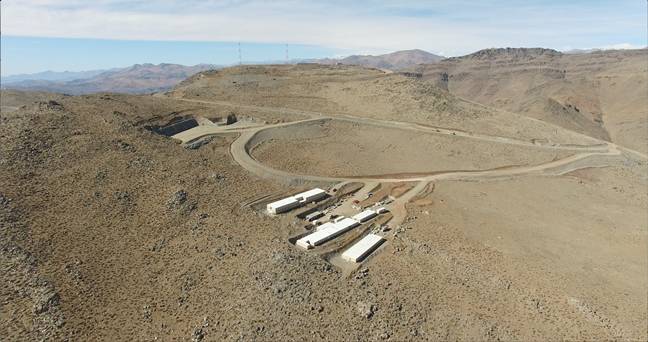 Early days yet for the Giant Magellan Telescope site

In exchange, we give ten per cent of observing night to Chilean astronomers which they can use however they wish. While there aren't a lot of astronomers in Chile, it turns out they have a lot of friends. The University in Chile has a very strong group, as does the Catholic University, and now we're seeing some of the smaller cities building their own astronomy departments.