Panasonic wants you to wear Li-Ion batteries. The ones that explode 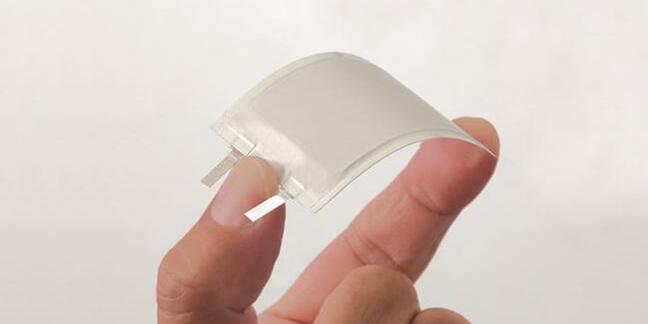 The Japanese company may not have picked the best month in which to launch the device, given the spontaneous combustion of numerous Galaxy Note 7 phablets and reports of Li-Ion-powered smartphones causing fires on planes.

Panasonic says it's got those problems licked because its new “Flexible Lithium-ion Battery” - the marketing department has some work to do - “uses newly-developed laminated outer body and internal structure that make it difficult to cause leakage and abnormal heating during repeated bending and twisting.”

Apparently there's a “newly developed laminated outer layer and newly developed internal structure” that together make it both safe to use and capable of retaining 99 per cent of its initial capacity even after “1,000 bends with a radius of 25mm, or after twisted 1,000 times with an angle ±25°/100mm”.

Panasonic's description of how the battery survives all that flexing and gyration is understandably sketchy, because it doubtless doesn't want to give away the secrets of how it makes Li-Ion batteries survive conditions that make rivals go up in flames. Literally.

Credit-card sized gadgets are the most-mentioned application in Panasonic's announcement. It says kit in that form factor is held back by batteries losing capacity, something its bendy efforts have beaten.

Which could mean a revival for the Franklin Rex, the late-1990s personal digital assistants crammed into a PCMCIA Card*.

Panasonic says it's about to start making samples gadget-makers can put to work, in three configurations. ®