A year living with the Nexus 5X – the good, the bad, and the Nougat

The last of Google’s Nexus line

Comment It has been nearly a year since the Nexus 5X smartphone was launched. On Tuesday, October 4, Google is expected to announce new smartphones – and possibly more – at an event in San Francisco.

The new handsets won't be branded Nexus and won't have the clean, stripped-down version of Android that Nexii owners have come to expect. So, nearly a year after doing the first review of the 5X, how well has possibly-the-last of the Nexus line held up?

Full disclosure: Google loaned journalists covering the launch the handset for a year, and I've made it my main phone for the duration. The results have been largely good, except for the past month, but some failings have become apparent as well.

The basic hardware of the Nexus 5X has held up pretty well, helped in part by the fact that it never leaves the Speck case it came with.

The white plastic backing, despite almost never seeing the light of day, has managed to pick up some ingrained dust that got into the case over the year, but still looks remarkably clean. The microphone and speaker on the front of the device have also remained unclogged by dirt and grime, despite the phone spending a lot of time in a back pocket and a seldom-cleaned backpack.

Getting jumbled around with keys and pens in said sack hasn't damaged the screen at all, and the Gorilla Glass has done its job well. But the same can't be said of the screen's oleophobic coating, which has degenerated badly.

Manufacturers cover the outer layer of most smartphones with a thin layer of material that repels fats and water – it differs slightly between manufacturers and Google hasn't confirmed what it uses. This stops fingers smudging the screen and gives the handset a nice slick feel, but with the Nexus 5X this covering wore off in six months or so.

It's possible to strip off the protective coating using alcohol wipes, but in this case simple wear and tear has left the handset needing a clean every few days to get rid of smudge marks. There are commercial kits to replace the coating, but you'd think it would have remained intact longer on a phone designed to last for years.

The same problem appears to have hit the camera house in the back of the device. Just holding the phone brings the fingers into contact with the camera, since it's just above the fingerprint sensor, and that did mean having to clean the lens before shooting.

Possibly the most impressive thing about the new phone is battery life. A day's use is easily handled and, if you're careful about keeping battery saver on and apps in power-sipping mode, two full days is realistic.

The only other damage seen after a year of heavy use was to the Speck case. Frankly, you need a case with the 5X, as it's a slippery little bugger, but the rubberized fittings on the case have started to wear away or tear off in the last month or so – not Google's fault. 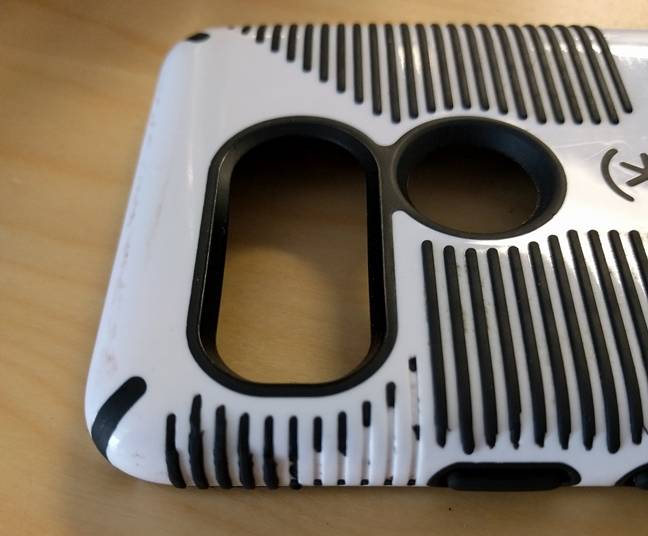 Some wear and tear

While we're on third-party kit, it's worth noting that switching to USB C, the only port supported by the 5X, is also a big shift from a usability standpoint. USB C has a number of real advances – better data rates, faster charging, and no more finding the right way up for the port – but there is a downside in availability.

Google ships the phone without a cable allowing the phone to plug into older USB ports, so you're stuck with power point charging and your old kit won't work. On a road trip last Thanksgiving this quickly became a problem, not least because no electronics stores had the right cables or chargers.

This is more of an issue with the newness of the connection, however stores are still not stocking much in the way of Nexus-compatible connection cables, and some of the ones you find online are downright dangerous. A Google engineer has done sterling work testing third-party cables, but the 5X does mean yet another cluster of redundant charging kit left lying around.

Other than these issues the phone hasn't had a serious fault, and the battery life remained as good as ever. That is, until Nougat came along.

One of the best things about a Nexus phone is that you get security and operating system updates well ahead of everyone else – typically within a week of announcement. Unsurprisingly, Google looks after its own, and receiving the monthly update from the Chocolate Factory is very reassuring. It also meant that Android Nougat came down as an update within a few weeks of it being released – a sizable download, and one that promised some major improvements.

At first things looked very good. Battery life was slightly better, there were some nice editing tweaks for the interface, and apps seemed to run slightly more smoothly. However, after a month or so this changed.

The battery life, once over a day, now fell down to under eight hours. At the same time, data usage went through the roof, with the operating system taking up a big volume of both battery and data. Judging from the Google support boards, this isn't an uncommon problem, with a fair few users having similar issues.

Thankfully the problems weren't terminal – factory reset managed to fix the issue. But that still meant a few hours set aside to reauthenticate all the apps and get the full complement of ebooks and music back on the device.

Based on the past year, I'd stand by my review last year, finding that the Nexus 5X is a good-enough device for a decent price. It's the last of its line and on Tuesday a replacement will be announced.

The Pixel line will kill off the Nexus brand, and it's widely rumored that the new phones will come without the stripped-down look for Android. Instead, a software overlay will be added – for better or worse.

Certainly, the spec on the new handset looks slightly better. More RAM is going to be handy, since the 5X is at the near limit of its memory when loaded up with apps, although battery size is pretty much the same on both the old and the new units.

Under the circumstances, the 5X isn't going to get dumped any time soon. The hardware is still working fine, and with a new oleophobic coating it'll be good for a year or so yet. ®