Good God, we've found a Google thing we like – the Pixel iPhone killer

Hands-on Google is taking on the iPhone.

At an event this morning in San Francisco, the web advertising giant took a huge leap into hardware with a range of new products aimed at taking on, and beating, the most popular consumer products on the market.

Top of the list: the Google Pixel phone, which is aimed squarely at the iPhone. Literally – it looks exactly like an iPhone. A very early review: if imitating Apple was the goal, Google may have pulled it off perfectly.

The new Pixel phones are not just a nice new Android 7.1 phone, they are specifically targeted at iPhone users. It's almost as if Google wrote down the top 10 reasons why people stick with Apple's pricier product and didn't stop until they'd crossed each one out.

Plasticky, cheap feeling case – gone. The new phones are solid and metallic. Smooth edges and curved design. Check. Nicer looking and feeling interface – yep. Better camera? It's in there – and, according to Brian Rakowski, VP of product management, it has "the best smartphone camera anyone has ever made." 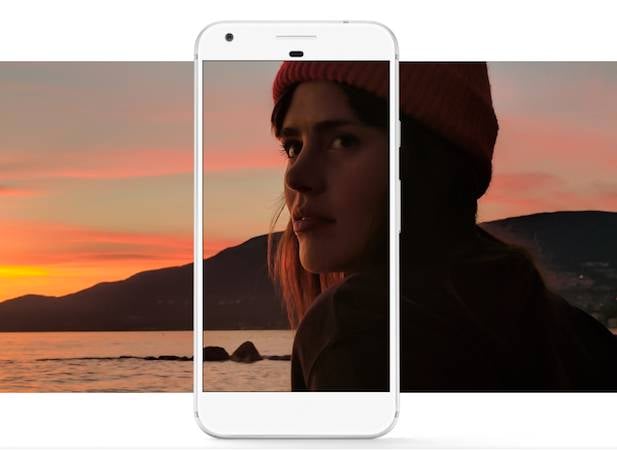 The other features are designed to deal with iPhone frustrations:

And then the really personal stuff. "No unsightly camera bump," notes new hardware head Rick Osterloh. Google is going to offer 24/7 customer service from your phone, including the ability to share your phone's screen with a support rep. Yes, that's right, no more dealing with the infuriatingly smug "geniuses."

And those huge software updates? Google says the phone will update in the background – "gone are the days of staring at a progress bar," says Sabrina Ellis, director of product management.

The colors are right out of the fuck-you-Jony-Ive playbook: they're called Really Blue, Very Silver and Quite Black. Oh, and it's a got a headphone jack.

Of course, among all the fighting talk, the big question is can Google walk the walk?

Here's the reality: we got to play with the new Pixel phone for approximately 15 minutes. In fact, we played with three different phones for five minutes each because of the queue of people trying to test them out.

A big, crowded event with excited people is not exactly the best atmosphere to objectively test a phone. And it always takes time to figure out what a particular phone's annoying niggles are.

For me personally, an iPhone user, Android phones always feel a bit clunky. All the components are there, and there's some nice styling too, but it still somehow feels like a Toyota rather than, say, a Mercedes (Samsung, of course, has created a lovely Lexus equivalent; just a shame it blows up).

The first feeling with the Pixel was that it was the same class as the iPhone, from small things like the better-looking icons, to more significant aspects like the screen quality and processor speed.

The screen was responsive. And bright. The phone fast – very fast, in fact. Google has taken many of the things that are nice about the iPhone's operating system and just copied them: from the swipe notifications to the quick access to key settings and applications.

I downloaded some apps and games: pretty much the exact same experience. I spent 15 minutes testing out the camera with photos and videos and comparing the results to my iPhone. The upshot? Google's phone produces more realistic photos – they caught what I was looking at a little better. The video stabilization tech that Google excitedly talked about is, frankly, extraordinary. Even spinning round a room and jumping up and down didn't faze it.

This is the first phone that Google has really decided to put its weight behind, and first impressions are that it has done an outstanding job. It seems to think so, too.

Time will tell, of course, and until we can get our hands on one for a few weeks, it's going to be impossible to tell for sure whether this is an iPhone killer or just Google playing catch-up with a clone.

One ominous sign: the Pixel cases that Google displayed on the wall of one of the booths all had a round hole in the back. That same hole for iPhones has always been a symbol of the slightly mad fandom that surrounds Apple products – seriously who gives a shit about seeing a logo? But Google has put that hole there too, except it's for the fingerprint reader. It's a direct challenge, even a mockery. The next few months will determine whether that hole is the sign of a wannabe or a conqueror.

You can find more nerdy stats here. The new Pixel phones are available to order now. They start at $649. Google is "teaming up exclusively" with Verizon in the US, but you will be able to buy unlocked phones from the Google Store. ®