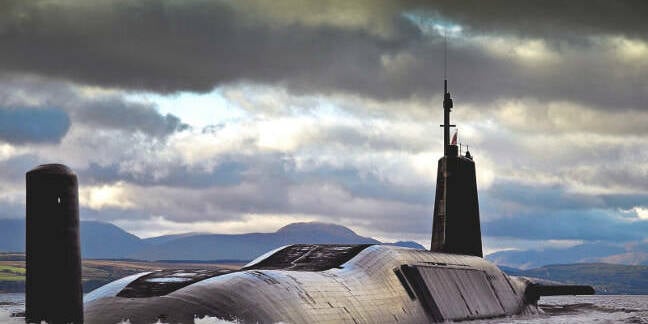 The United Kingdom is to get a new fleet of nuclear-powered submarines to deter Soviet President Putin from invading West Germany, the Defence Secretary announced on Saturday.

While Sir Michael Fallon didn't quite say that, what he did say was this:

Britain’s ballistic missile submarines are the ultimate guarantee of our nation’s safety – we use them every day to deter the most extreme threats. We cannot know what new dangers we might face in the 2030s, 2040s and 2050s so we are acting now to replace them.

The current carriers of Britain's nuclear deterrent, the Vanguard-class ballistic missile boats HMS Vanguard, Victorious, Vigilant and Vengeance, are due for replacement by the late 2020s.

This leaves just under 15 years to build the four new submarines, packed with the very latest in stealth and nuclear propulsion technology (and yes, including a modded version of Windows for Warships*), commission them, and get them into frontline service.

The government's £1.3bn investment in BAE Systems shareholders' pockets – sorry, the company's specialised Barrow-in-Furness submarine dockyard – will include the start of construction of the first so-called Successor class boat, as well as the purchase of ship's machinery that takes a long time to make – long lead items, in the lingo.

Specifically, BAE will be building the structure of the first Successor sub's auxiliary machine space, starting this week. This, we're told, is where items such as the boat's switchboards and the reactor control panels are located.

“Comparable in size to the Vanguard class submarines, the next generation of nuclear deterrent submarine is widely considered to be one of the world's most complex engineering challenges,” preened a BAE press release.

Tony Johns, MD of BAE Systems Submarines, presumably fresh from banking the £1.3bn cheque, beamed: "This additional financial investment by the MoD is an expression of confidence in our ability to build these sophisticated vessels. We have been designing the new class of submarine for more than five years and thanks to the maturity of our design, we're now in a position to start production on the date we set back in 2011. This is a terrific achievement and I pay tribute to all those who have made this possible.”

The Campaign for Nuclear Disarmament had apparently not noticed this announcement, which was timed to reach the Sunday newspapers. El Reg had a quick squint at their website and could only see items complaining about the Shadow Defence Secretary backing Trident at the Labour Party conference last week, and something about a protest against government spending cuts, which were first implemented five years ago. Nice to see them keeping up with their raison d'etre. ®

CND woke up and sent us a statement. Kate Hudson, their general secretary, said: "This decision is not in Britain's interest. Cutting steel tomorrow means wasting £205bn on a nuclear weapons system that will do nothing to address the security threats we face. Every billion spent on Trident is a billion that isn't spent on real defence and security." She continued: "What we need is policy designed for the 21st century. We need sensible proposals to tackle terrorism, climate change, cyber warfare and global pandemics, and an end to the Cold War mentality that we've witnessed today."

* The original version of Windows for Warships is not used aboard RN submarines. Instead, a bespoke software product – Submarine Command System (SMCS), originally written in the Ada programming language – was used until BAE Systems convinced the MoD to install SMCS-NG (Next Generation, predictably; SMCS ported onto Windows) on Blighty's nuclear boats. The rollout of Windows and its associated PC hardware was completed across the submarine fleet in 2008.

Your correspondent is pondering writing a brief(ish) history of Ada and welcomes contact from people familiar with the language.