There are now four Infinibox arrays in the range:

The entry-level F1000 arrived in August this year.

V3.0 of the InfiniBox software compresses data inline without impacting access performance. A data write arrives and is acknowledged in 180 microsecs. Then a background allocator function pulls the new data sectors and marshalls them for persistent storage on disk and the compression is done here so that data is compressed before it is written to disk. Currently the LV4 algorithm is used but there will be a library of algorithms for different types of data so that compression improves over time.

Compression can be switched on or off, on a per-volume or filesystem basis, and the capability is part of a free OS upgrade to all supported InfiniBox customers, Infinidat will be guaranteeing a 2X compression ratio result. With compression, Infinidat says its arrays scale to over 5PB of usable storage capacity in a standard 42U rack.

Previously iSCSI support, which arrived in 2015, was a third-party-produced piece of software and necessitated the use of 3U iSCSI nodes in a rack, space which has now been reclaimed. MSP customers will be pleased with this. V3 of the IOS has Infinidat’s own software iSCSI technology, running natively on its cluster of three controllers. This makes iSCSI a first level peer protocol to FICON, Fibre Channel and NFS.

The system is still at 7 x nines availability with non-blocking Ethernet, and support for transparent fail-over in case of port/node failures. CTO Brian Carmody thinks there is a huge market for carrier-grade iSCSI, with VMware, Windows and OpenStack support for it.

We understand 32Gbit/s Fibre Channel should arrive in the second half of 2017.

The array analytics functions have been improved, with multi-dimensional analysis, and not just time-series based functionality. Dimensions such as time, IO type and latency can be checked. 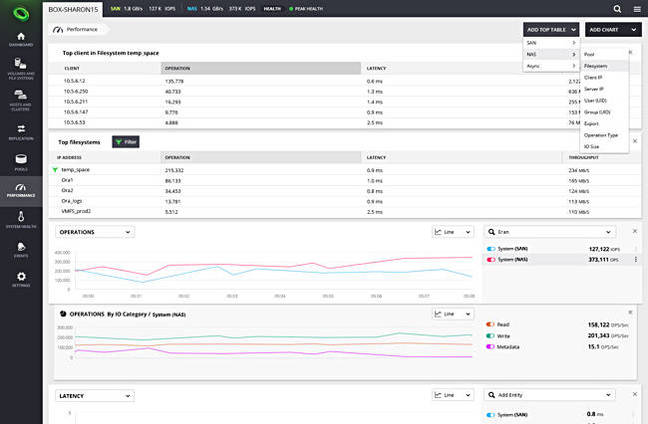 Every single data point used in the analytics GUI is also accessible through a Rest API, which the GUI code uses behind the scenes.

Infinidat says its arrays are faster than all-flash arrays, partly because they use DRAM and flash caching to get at the disk-held data faster. The array’s architecture is such that different media can be used, should media price/performance change to enable the array to hold more data and serve it faster. Currently it can support disk drives holding up to 20TB. It says it has line if sight out to 100TB drives through talking to the disk drive vendors.