Scientists aren't completely sure where they are coming from

NASA's Hubble Space Telescope has detected massive, super-hot "cannonballs" shooting from a dying star, which has left scientists puzzled over the source of these giant globs of gas.

The fireballs are twice as big as Mars and are travelling so fast, it would only take 30 minutes for them to travel from Earth to the moon, according to Hubble's website. Its surface temperature is 17,000 degrees Fahrenheit (9,427oC), making it almost twice as hot as the surface of the Sun.

The host star, V Hydrae, is an expanding red giant clinging to life by burning the last of its hydrogen fuel into helium. It has probably lost half of its initial mass by shedding its outer layers. The bubbles of plasma could not have been ejected by the dying star, however, the scientists said.

By capturing a spectrograph of V Hydrae and its surroundings over eleven years, first from 2002 to 2004 and then from 2011 to 2013, the researchers propose a different model.

The research has been published in The Astrophysical Journal. Scientists found that the event of fire balls raining from V Hydrae happens every 8.5 years, prompting them to believe that a smaller, invisible companion star may be the actual culprit behind such strange behavior.

The researchers think the secondary star is in a close elliptical orbit around V Hydrae, and is carried into the red giant's atmosphere every 8.5 years. As it enters V Hydrae's furthest layers, it sucks in surrounding material, which is added onto a disk around the smaller star and becomes a "jet-launching zone."

The balls of plasma produced from V Hydrae bounce off the smaller star's disk and are launched as "cannonballs" that travel at half a million miles per hour. 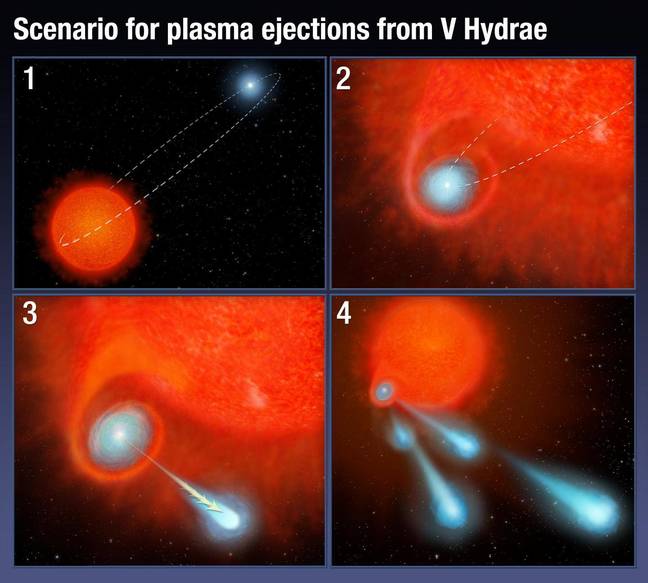 Not only does this model explain the periodic nature of the cannonballs emitted from the red giant, but it also shows how the region of glowing gas around ageing stars, also known as planetary nebulae, can be so varied.

"We knew this object had a high-speed outflow from previous data, but this is the first time we are seeing this process in action," said Raghvendra Sahai, lead author of the study, and researcher at NASA's Jet Propulsion Laboratory. "We suggest that these gaseous blobs produced during this late phase of a star's life help make the structures seen in planetary nebulae."

Planetary nebulae can come in all sorts of shapes and sizes. The famous cat's eye planetary nebula is pictured as two semi-circular blobs of gas crisscrossed around a dying star. Some are less structured, while others have more complex shapes, with knots of gas twisting around the star that creates patterns.

Astronomers believe that hidden within planetary nebulae lies a smaller star that remains unseen, which creates powerful jets of gas around a larger star. They believe their model is the "most plausible explanation" right now, but hope to use more data collected from Hubble of the V Hydrae system, including the most recent blob ejected in 2011.

They also plan to use the Atacama Large Millimeter/submillimeter Array telescope in Chile to study plasma bubbles launched over the past few hundred years that are now too cool to be detected with Hubble. ®

Hubble Space Telescope restored to service: No repeat of those missing messages, but here's a software patch anyway

Of course we've tried turning it off and on again: Yeah, Hubble telescope still not working

Pics After hundreds of hours of work, engineers called out of retirement for help
Science20 Jul 2021 | 52