Not you, buddy, the product's UI

Tech 2.0 is all about the evolution from that welded together open source solution towards an investable product. For this you'll need a management UI that makes people say "wow". Kickass Developer will be noodling about under the hood replacing or extending the open source packages, while the minion devs will build a UI on top of the API.

The two core pieces of intellectual property our storage startup will develop here are going to be the code that accelerates storage using the FPGA in the Xeon-D and the metadata system overlaying the object storage.

The FPGA code allows for faster/stronger/smarter/better nodes that serve more IOPS while consuming less power. This is important, because while everyone else is lowering costs with hyeprconvergence, our startup is going to try to convince customers to invest in storage separate from compute. Our only means to lower costs is to offload as much of the storage calculation as we can to the FPGA in order to cram ever more NVMe drives into a single chassis.

The metadata is almost meaningless at the early stages, but is the key to everything in the long run. We'll get our keystone customers by virtue of nothing more than going really, really fast in a very small footprint, but that advantage won't last.

Building a flexible, extensible metadata engine right at the outset allows us to do neat things later on. As the 2.0 is all about the sprint from angel round to A round, the metadata we store is going to be pretty similar to what most file systems store: object size, name, ACLs and so forth. That will change.

Once a management UI exists that isn't worthless and the underlying storage product does the job of going really, really fast while still being reliable it's time to get those keystone customers and chase the A round!

You have a product that works. You have a product actual people in actual companies can and do use. Yes, you had to give the product away for free and bribe the people involved to get it into production, but that's all in the past. You've got an A round, probably about $10m, and the faith of investors that you can take this all the way.

Here you can expect management changes. Livens explains: "The other thing that I ponder is the longer term role of the Gladhander. I think that typically an early stage GH has critical skills that are vital to success, but a different skill set is needed as the business scales. They are a visionary with the drive and enthusiasm to spell out a vision and get others (internal and external) to follow. However these people are not typically operational in nature. There is an element of beancounting that is required as CEO that these folks are typically not skilled at that. Of course, that is where a strong COO could come in and so maybe they become CEO, but long-term, I see them moving to other roles."

Our storage startup now needs to build out the sales and marketing apparatus. While the nerds beaver away on the 3.0 product that will lead into the B round, the current version has proven good enough for some use cases and so it's time to hit the convention circuit!

An A round startup isn't hitting the convention circuit desperately seeking leads. Its still early days and 10 of the right customers are better than hundreds of the wrong customer. The startup needs customers that can push the technology to its limits, are personable and friendly (so they won't sue every time they find a bug) and who will ultimately bring in more revenue than the cost of support.

More than anything, our storage startup has to find customer advocates. These are customers willing to talk about how great the storage solution is to investors and potential customers, even if those discussions need to be NDAed. 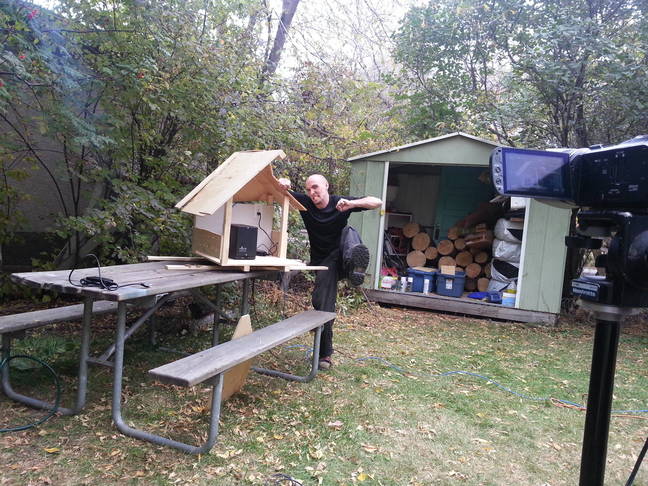 Get customer buy in! (That picture takes me back...)

The A round is about building a portfolio of customers, analysts and tech press who fawn over you and convince everyone else you're the greatest thing since sliced bread. Sales is important here, but marketing and PR win the day.

The technical marketing manager told me start ups build what he called a “major crescendo of community buzz” up to their next major release. That consists of customer advocates, publicly facing corporate cheerleaders (aka “the evangelist”), and community influencers who have gotten a good look under the covers and get really excited for the future possibilities of the product.

This has what he called a huge multiplier effect for startups.

Getting the name out there, getting viewed as a disrupter/innovator/all around cool company, and having the community falling in love with you early on in the product cycle is never a bad thing."

In the background, the nerds are working on the features that will drive the long term viability of the product. Kickass Developer is doing less and less hands-on coding and more architectural level work. Gladhander hasn't slept in six months and Tech Writer has gone back to the beginning on all their content because Tech 3.0 is going to change everything.

Johnson has a warning for all: "Shipping the product is just the beginning. Everything is 10x harder once the product ships. Support needs to come online. There will be bugs. There are always bugs. Support will be new, so engineers will be involved in the escalation process. The more time engineers spend helping with support, the less time they are coding. It is a whole new world."

With Tech 3.0 our storage startup is going to stretch to the cloud and embrace third-party storage. The core product is still super-duper deluxe NVMe storage of fastness, but the ability to put data in the cloud or on third party storage opens entire worlds of possibility.

Not everything needs to be on our NVMe rocketship. The ability to place cold data on cheaper storage or archive off to the cloud means that instead of a niche player addressing the needs only of speed freaks, our storage startup can now get into brownfield environments.

We get into these existing installations not by killing them, but by co-opting them. Allow customers to subject their existing storage to the NVMe cluster's clearly superior management interface and make their lives easier. You still need to buy one of our crazy NVMe clusters, but you don't have to throw away all your old storage when you do so.

Bear-hugging third-party storage also allows our storage startup to embrace new data protection schemes. Now you can copy data to other storage units or even up to the cloud. Infrequently used data can be tiered, data resiliency that requires data on device from multiple manufacturers can be built in and more. 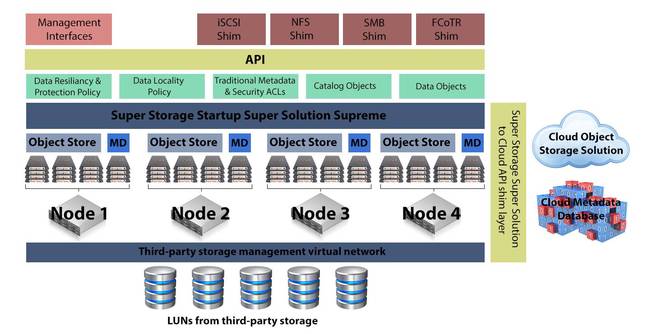 Take the data locality work – done back in Tech 1.0 in order to solve speed problems – and extend it using the metadata engine we designed, but never really explained the use for. Now our storage startup has a product that allows customers to "tag" objects with locality information.

Objects can be individual workloads (LUNs), or in the case of NFS and CIFS shims, individual files. Now we can do neat things like tag "this file/workload cannot be stored in an American data centre", etc. This is essentially done by extending the metadata engine used to store the objects on the cluster, and opening an API so that DevOps teams, service providers and so forth can flag files in an automated fashion.

Tech 3.0 just became something that service providers absolutely must have, banks will fall all over themselves to get hold of, and CDNs will start paying attention to.

Part One here and Check out Part Two here.

In the final piece of my series, we tackle customers and flipping from startup to officially functioning young company. ®