Something for the Weekend, Sir? “Ooh, I’m so hot! And I’m getting even hotter for you, big boy!”

This is totally unexpected. I don’t know what to say.

“Do nothing, baby. Just listen to the rush!”

I wondered what the noise was. I thought I was going deaf.

“Not at all! Now just sit back and contemplate what’s going on in your lap.”

As if I could concentrate on anything else at this moment.

“Oh yes, I think we’re ready to go again! How about I give you another blow?”

Meh. Another day, another proposition. Disappointingly, this time it’s my laptop offering to do the business, right there in my lap.

Ever since I updated its operating system to Sierra, it’s been running hot and cold. Actually no, I mean hot and hotter, regularly firing up the fans in an attempt to cool itself down.

For my laptop is a MacBook Pro – or given that the operating system has been pointlessly rebranded from “Mac OS” to “macOS”, it is probably now called a macBOOK prO. From apPLE.

Luckily for them, this overheating issue has been entirely ignored by the general public because it barely reaches lukewarm proportions compared with the quite literally explosive problems over at Apple’s playground enemy, Samsung.

It’s not for me to trawl up old news about the fire-starting, twisted fire-starting Galaxy Note 7 since it’s been repeated to death in the mainstream media channels already. Let me simply express my manga-reader’s tingle of recognition when some people started calling the product the Death Note.

In fact, I think I managed to source a photo of the event at which Samsung announced the immediate recall of all units: 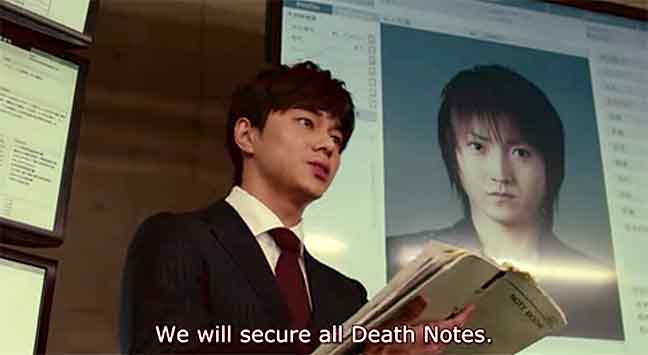 Ryuk will be so disappointed.

Back to the Cupertino dickswingers, though: for the benefit of those of you who don’t care what the fanboi favourite does, I am happy to confirm that your gut feeling is well-founded. macOS Sierra is an upgrade that puts Siri on proper computers, hauling it up from its previous hopeless depths of uselessness to somewhere almost half as good as Cortana.

And Cortana, as you must already be aware, is about as indispensable in the burgeoning personal AI field as the unwanted cork placemat you were given by an aunt some 15 Christmases ago and are now using to stop your (actually useful) Amazon Echo from scratching the surface of your coffee table.

I don’t use Siri because it’s an idiot that can’t understand plain English spoken by an Englishman living in England. Unless, of course, the problem is that I am only half English: perhaps it’s the Scottish half that’s buggering up Siri’s comprehension of wha’ um sayun'.

Besides, there’s little chance of Siri being able to hear me over the noisy racket of my MacBook’s fans going apeshit crazy so as to prevent my keycaps from melting. This must be what it feels like for Ontarian hipsters teleworking from a cafe at Niagara Falls, except with less humidity and better tea.

Honestly, if the fans blew any harder, my MacBook could technically be classified as a drone.

If only I could do something about its 2kg payload, I could hire my aluminium Apple drone out to run errands, delivering lightweight goods such as paperbacks and condoms. I could even get it to spy on my dickhead neighbour who has spent the last 12 years of weekends in his back garden noisily assembling a gigantic rotting wooden shed that looks like Santa’s chalet shitehouse.

So, great. I’ve updated my laptop to an operating system that guzzles a full battery charge in less than half an hour. To my horror, I discovered that it does this even when asleep. Perhaps Sierra gives it nightmares.

This not a good thing for a computer supposedly designed to be used away from a mains power source. Need. Solution. Now.

I checked the user forms at Apple and elsewhere, but found only the same old suggestions that never work such as zapping SMC and NVRAM.

Oh for the love of gaaahd. Who are these helpful souls who go around the forums insisting that every Mac issue ever encountered can be solved by restarting the computer with your fingers held down on keys at opposite ends of the keyboard like a double-jointed cellist? You may as well hold another finger in the wind and thrust one up your arse for all the good it’ll do.

Indeed, on my forum visits, offers of solutions were far outweighed by posts by people like me, asking why their MacBooks have suddenly begun blowing sheets of paper off their desks. Some of them didn’t even know that laptops had fans until now, and boy do they know now.

Another suggestion is that the updated OS is indexing itself, as if my MacBook was constructed by Heath Robinson and that the indexing process isn’t done in software at all but by fans, and probably a host of cogs, string and spoons holding eggs.

Look, if it hasn’t finished indexing my 14 photographs by now after a week, it never will. Time to take the solution into my own hands.

A quick peek into Activity Monitor and there it is: the culprit is my old friend, the Safari web browser.

Safari is apparently chomping its way through “99%” of my CPU resources. Er, and open web pages are eating up another “105%”... each.

Something tells me that either Safari is a jolly demanding mistress or Activity Monitor doesn’t quite understand the concept of percentages.

I close a web tab. The fans become quieter. I close all my web tabs. The fans are quieter still. I quit Safari. The fan noise fades away to silence.

Uh-oh, later in the day, the fans are back with a whoosh! What’s up, Activity Monitor? I see, this time it’s iTunes, which launched automatically when I began recharging my phone, and is now taking up “103%” of the CPU. Within seconds of me quitting iTunes, the fans die away again.

So I’ve discovered the fix all by myself: under macOS Sierra, make sure you don’t launch any Apple software and you’ll be fine. Bang, solved.

Sorry, Samsung, you’re on your own. Bang bang.

Alistair Dabbs is a freelance technology tart, juggling IT journalism, editorial training and digital publishing. His fat-loss regime has stumbled past another unexpected milestone as he has discovered that none of his autumn clothes fit at all. He has shrunk to t-shirt size “S”. At SportsDirect, he needs XS, possibly to be more clearly distinguishable from its rather more popular XXXXL range. FBI Update: 16kg.