But who checks the fact-checkers?

Analysis I remember when I first noticed “factivism”. It was more than 10 years ago.

In 2003, Californian internet evangelists were still bruised by the dot.com implosion when the United States invaded Iraq on a bogus pretext, WMDs. The web evangelicals thought: wait a minute. The Internet (PBUI) is a Good Thing. The Internet delivers information, and it’s where people talk so nicely to each other. Couldn’t The Internet have stopped this terrible thing?

Inspired by this, Silicon Valley’s best known newspaper tech pundit left his job to become a preacher, and “factivism" became a big part of his sermons. Dan Gillmor’s We The Media imagined real-time fact-checking during Presidential Debates.

"I would prefer to see TV networks flash corrections on the screen as soon as they caught the candidate in a lie. Distracting? Perhaps, but maybe the candidates would lie less often or at least less brazenly,” Gillmor wrote. "Even more valuable would be giving the candidates more tools to correct each other. I would build a personal computer into each podium, connected to whatever online resources the candidate and his staff found useful."

This drew from the ancient positivist idea that facts would triumph over the lived experience, combined with a modern faith in crowdsourcing. Thanks to the internet, the "Wise Crowd" could play a role in checking the facts, and naturally bloggers got very excited by this: they could play an important role in civic life without having to leave the sofa. So bloggers got very excited by this. You can see why they hoped this might work. The US press picks two (and only ever) two sides to a story and studiously transcribes everything each side says, so if one side is simply making stuff up, then those “contaminating" factoids never go away.

Gilmor eventually recanted his belief in factivism, but at Google, the faith burns bright.

A year ago Google floated the idea that it should now act as an arbiter, a kind of Ministry of Truth, by ranking search results according to its own metric of accuracy. Now, just in time for the 2016 Elections, Google News is going to give factivism a lift by promoting “fact checking” sites into news clusters, and giving "fact checking” stories a special tag. The tag will indicate that you can believe the tagged stories a bit more than you can the others. Not surprisingly, this has caused some disquiet.

For a start, “fact checking” sites are just a bit more subtle about advancing an agenda than other PR or activism hubs. Is it sufficient to self-certify as a fact-checking site to gain the promotion, and boost in attention? Who checks the fact checkers?

One fatal flaw is that it supposes the existence of a Brahmin caste, a Priesthood of dispassionate fact-checkers, who will deliver a verdict everybody will trust. Such a Priesthood doesn’t exist, and given what a decade of dubious appeals to authority, with the media complicit in these exaggerated and often apocalyptic tales - people are not likely trust what it says anyway.

Another is a consequence that in largely rhetorical debates, most of the assertions will be er,... rhetorical. So what purports "fact checking" turns out to be a straightforward contestation, and often a childish contestation at that. This widely derided example from Comcast’s NBC News illustrates this: 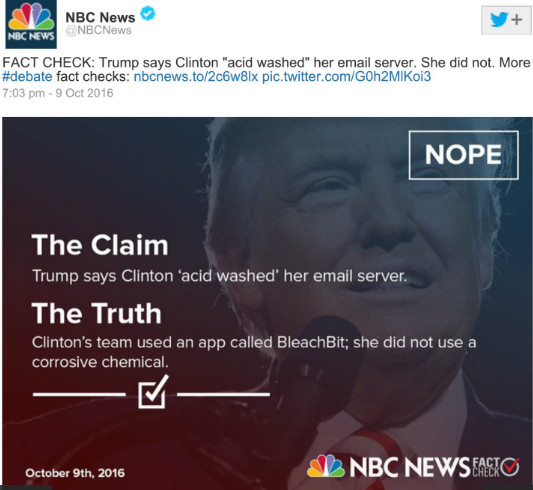 You don’t bring fact-checking to a figure of speech. This pearl from Politifact (“Winner of the Pulitzer Prize”) is even more pointless.

Just saw some fact-checks about my candidate, off to change my vote - said no one ever

Trump may be the catalyst for Google’s initiative, but the explosion of positivism fact-checking Trump is an exercise in political powerlessness. Trump really could not care less about his Truth-O-Meter rating.

Trump’s demagoguery wasn’t created by a lack of factivist blogs, and it won’t be beaten by a better Truth-O-Meter. Trump got as far as he did because the main parties had stopped listening to people’s concerns, in preference for the country clubs, Wall Street and gestures politics. (Both main US parties are guilty of all indulging in all three). Over decades, politics became about talking at people, in the belief that humans can "be engineered and corrected by instruction from their enlightened betters”, as Daniel Bell wrote in The Coming of Post-Industrial Society.

As thoughtful writers have pointed out, the political class left a vacuum. Trump may have brought about the overdue collapse of the Republican Party, but the other shoe has yet to drop; it surely must with a Democratic President who tells Wall Street that politicians need two faces: a public and a private position on issues.

Factivism is really a retreat from political engagement, and deserves to be synonymous with civic inaction. If you think it’s the answer: I confidently predict more Trumps. ®