Best part of update is taste of much-promised GNOME beauty

Canonical's Ubuntu 16.10, codenamed "Yakkety Yak", is nowhere near as chunky an update as 16.04 LTS was earlier this year. But that doesn't mean there's nothing new. In fact, the firm's second release of the year has quite a few fresh features to hold users over until the bright and shiny future of Unity 8 and Mir arrive some time next year.

Nevertheless, it's very odd to have what feels like a smaller update arrive with Ubuntu's October release, which typically is the more experimental release with tons of new features being tested. This time around that's not really the case. In what's become a familiar refrain for Ubuntu, most of the work is happening with the still-not-quite-there Unity 8.

Ubuntu 16.10 marks the seventh time Unity 8 has not been ready for prime time. While Unity 8 appears to be progressing - judging by developer updates and playing with pre-release versions - it is, at this point, in danger of joining Duke Nukem Forever on the great vaporware list in the sky. Still, take heart Ubuntu fans, just as Duke Nukem Forever did eventually see the light of day, it seems very likely that Unity 8 and Mir will in fact be released eventually. Perhaps even as early as 17.04. Also, I have a bridge for sale, if anyone is interested. 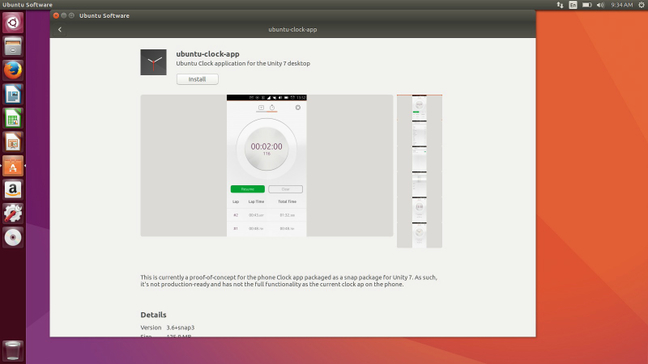 The process of installing a Snap application via the Software app has been greatly improved.

What remains to be seen is how long the Ubuntu faithful will hang in there, waiting, hoping for Unity 8 and the accompanying Mir display server to get here, especially when, for the past few releases, there have been little more than bug fixes to the primary Unity 7 interface. On one hand Unity 7 works just fine and it's entirely possible that a year from now Unity 8 bugs will lead to a great wailing for a return to the stability of Unity 7. Still, when you've been promised something and it keeps getting pushed back you eventually start to feel like a kid who's been told once again that Christmas has been postponed.

Unity 8 and Mir form two parts of what might loosely be called the future of Ubuntu. While two-thirds of the future may be still too deep in development to be usable, the other third is here, and has seen some real improvements in this release -- Snap applications.

Ubuntu's Snap applications are self contained applications. That is, they package all their dependencies within a container, which means you can easily install applications that would otherwise have conflicting dependencies. For example, if the version of Gimp you wanted to install needs libjpeg version 1.0 but your existing install of Darktable needs libjpeg version 1.1, you have a problem that's not easy to solve. Unless of course both are Snaps, in which case each would have the needed version of libjpeg available in its container.

Snap applications solve quite a few other problems and may even offer better security as well, but eliminating dependency conflicts is the biggest win for end users. For Ubuntu in particular Snaps represent a way around the problem of shipping very out of date GNOME packages. Snaps make it simple to keep the core GNOME packages wherever the Ubuntu devs need them, while allowing users to install more up-to-date version of their favorite software. Which is to say, you can have your LTS release and get your latest and greatest application updates too. Because there's no danger of pulling upgrades that mess up the rest of your system, you can always have the latest software without having to run the bleeding edge of the actual system software. 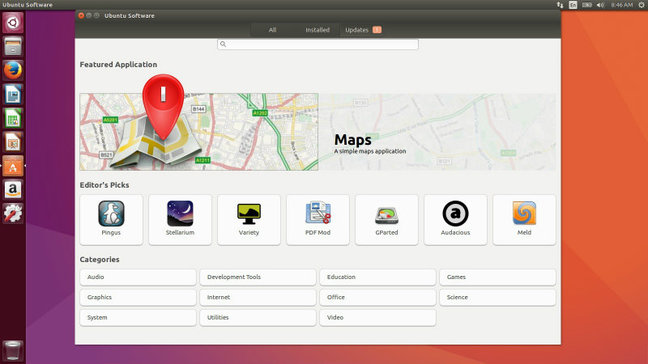 The Ubuntu Software application is now much snappier.

Ubuntu 16.10 improves the Snap installation process by making Snap packages available alongside everything else in the GNOME Software app, er, sorry, the Ubuntu Software app. There's still no easy way to search for Snap versions of apps specifically, but there are now screenshots available for Snap apps, something that was missing from the first release that arrived in 16.04. To find Snap apps you can search for "snap" and you'll get a partial list, but you'll still get far better results searching from the command line with the "snap find myapp" command.

As for the experience of Snap applications themselves, well, it still very much depends on the application in question. LibreOffice, one of the bigger applications available as a Snap, is generally just as stable as its traditionally packaged counterpart, though thanks to the sandboxing of Snap apps, some features are missing (because they would be a security risk in the world of Snaps). Other applications I tried, like Krita, seemed to work just fine (though there was a warning about the Snap version not working with proprietary NVidia drivers).

Like Unity 8 and Mir, Snaps are still a work in progress. The difference is that you can actually use Snaps today and there are real benefits to be had - like avoiding dependency conflicts.

It's also worth noting that Ubuntu has continued to work on its clone of the GNOME Software app and this release is, thankfully, much faster than what shipped with 16.04. The Software app also now handles stuff well outside the traditional software wheelhouse, like CLI apps, fonts and other system tools. I would call this a dubious "improvement". Fonts are certainly welcome, but does anyone really install CLI tools using a GUI? And many of the system tools feel like clutter when they show up in search results. The Software app's search results are also still a mixed bag, searching for "vi" returned no results at all. Searching for "vim" returned a dozen.

Another noticeable GNOME upgrade in this release is the Nautilus file browser. Ubuntu 16.04 shipped with the new very out of date Nautilus 3.14. Ubuntu 16.10, on the other hand, has jumped all the way to Nautilus 3.20, which means Ubuntu users get some of the new tools that GNOME users have enjoyed for some time, like the file transfer progress widget in the toolbar, popover bubbles for quickly renaming files and huge improvements to the search capabilities.

Ubuntu 16.10 brings the Ubuntu kernel up to version 4.8, which is good news if you've had the misfortune of trying to run Linux on a Skylake machine.

It's also worth noting that this release is the first Ubuntu release to not fit on a single CD. As I noted in my review of the beta, the single CD is an arbitrary limit and there are both pluses and minuses to leaving it behind. One thing I failed to mention in the beta review though is that Unity 8 is packaged as part of the install CD now, which partly accounts for the increased size.

At the end of the day the question for most users will be simply, "should I upgrade"?

The answer this time around is not so simple. Most of what's new in this release will be backported to Ubuntu 16.04, which despite being an LTS release, has turned out to be a very bumpy ride for many users. But most of the standout updates - like the Software Center and GNOME packages - will get to 16.04 eventually, which makes 16.10 feel less essential.

The updated kernel is certainly welcome and if you've had trouble with 16.04 on Skylake or had graphical problems then 16.10 is worth the upgrade. Likewise if you want to play with Unity 8, 16.10 is well worth the update. ®