VSAN users get file access with DataSphere: It's a computing resource 3-way

+Comment Primary Data is providing file services for VSAN and its block-based storage.

The combined offering means that file-based workloads could be migrated to VSAN-based HCIAs, enlarging the scope of their applicability. 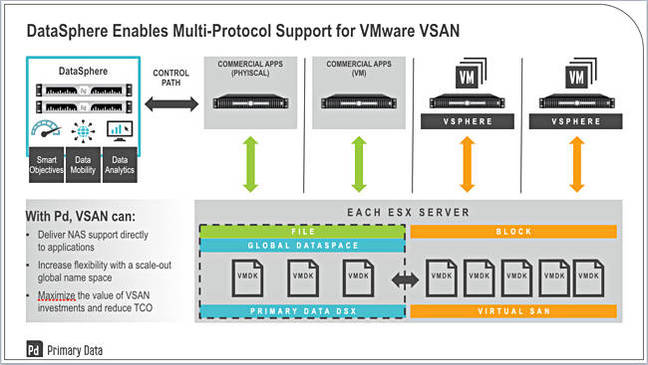 The HCIA VSAN-using nodes processors will now be processing applications, VSAN block storage and DataSphere file storage, meaning the computing resource is split three ways, thus somewhat limiting the performance available to each resource. It would be unrealistic, for example, to imagine a DataSphere VSAN could replace a high-performance scale-out Isilon filer.

It will probably be a good idea to carefully test out mixed file and block-based workloads on a proposed HCIA/filer combo before committing to it.

The DataSphere platform is now available from Primary Data and its reseller partners. Pricing is in the low $100Ks. Contact sales@primarydata.com to arrange a free consultation and software trial. ®

DataCore pushing parallel IO, and puts the cores to work

No more rack after rack of ‘poorly utilised servers’?