10x faster servers? Pop a CAPI in your dome

Not quite sure how the new mechanism works? Mull it over here

HPC Blog How does 10x faster server performance sound to you? Not in five or six years, but in late 2017? Ground breaking things are afoot in the server world. IBM’s new OpenCAPI mechanism, and the accompanying organization, promises to make this vision reality.

So what the hell is this new version of CAPI and who cares if it’s open? CAPI stands for Coherent Accelerator Processor Interface, and, in its new form, it’s a new layer on motherboards.

It doesn’t replace QPI or HyperTransport, it works as a very fast (3x faster than PCIe Gen 3) connection between CPUs and other peripherals like GPUs, FPGAs, fast memory, coherent network controllers, or coherent storage controllers.

Coherent, in this case, means that the components attached to CAPI are operating within the same address space as applications and can thus have the same access to data as the main CPU. Think of it as DMA (Direct Memory Access) on steroids.

I’ve appended a picture below for you to gaze at. 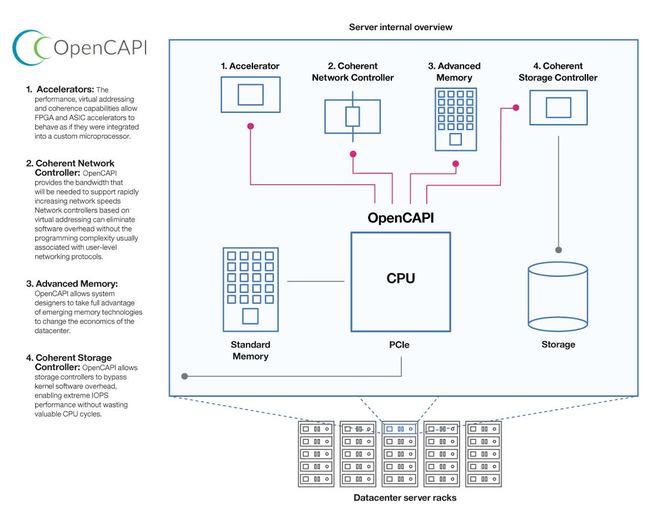 In recent years we’ve seen the emergence of a lot of new technology, with plenty more on the way. Things like accelerators, advanced storage, new network tech, and advanced non-volatile memory, to name a few.

PCIe has been the technology of choice to connect these new things, because it was the only choice. While PCIe has improved over the years, there are some downsides, it’s not the easiest thing to work with, and it carries a lot of baggage; baggage that allows it to remain compatible for everything from USB busses to high end accelerators. In other words, it has become bloated and kludgy.

Think of PCIe as an old freeway, clogged and with some potholes and with lots of toll booths to navigate (causing latency). In this freeway analogy, PCIe has 16 independent single lanes where cars travel either way. CAPI, by contrast, is a very wide superhighway built adjacent to the old PCIe interstate, with much higher speed limits (3x), way fewer toll booths (latency caused by interfaces), and adds coherency (which means that each car knows exactly where it’s going and how to get there.)

It is the increased speed of the wires, plus the radical reduction of interfaces to negotiate, which gives the potential for 10x speed-up.

One of the reasons that this is such a big deal is because of the new organization IBM announced last week, dubbed OpenCAPI. It’s drawn membership from a wide range of tech giants including, AMD, Dell EMC, Google, HPE, IBM, Mellanox Technologies, Micron, NVIDIA, and Xilinx.

It’s this slate of members that really gets my attention. Traditional enemies are being pulled together in favor of this technology – which, to me, means CAPI must have some serious technical benefits. These vendors must have seriously vetted CAPI and found it enticing enough to join up. With this type of industry support, we might be seeing the beginning of a new industry standard. Exciting times, eh?

More information on CAPI here and the OpenCAPI org here. ®