When diving your U-boat, check all hatches are shut

A sunken German submarine from World War One has been found at the bottom of the Irish Sea – and excitable folk are claiming the Loch Ness Monster sank it.

The official story of UB-85's sinking, as logged by the crew of Royal Navy sloop HMS Coreopsis and reproduced on authoritative U-boat history website uboat.net, is that she sank after being caught on the surface by the warship.

UB-85, a Type UB-III submarine of the Imperial German Navy, was sunk in the North Channel, between Britain and Northern Ireland, on 30 April 1918.

Her wreck was rediscovered earlier this year by marine surveyors working for Scottish Power and the National Grid, which are laying an underwater electricity cable through the channel.

UB-85's crew, in their haste to dive and evade the Coreopsis' gunfire, seemingly forgot to close one of her hatches, causing the boat to flood as soon as she dipped below the waves. The submarine's captain, Kapitänleutnant (lieutenant commander) Günther Krech, promptly surfaced and surrendered rather than drowning his 34-strong crew. 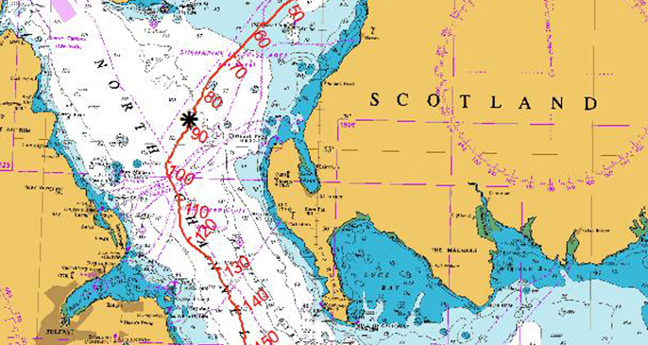 So far, so ordinary. But what was UB-85 doing, prowling on the surface in the middle of hostile waters?

This is where it all gets a bit sketchy. According to the official account, UB-85 was on the surface recharging her batteries. Diesel-electric submarines use electric propulsion motors while submerged and diesel engines while on the surface; to recharge the batteries, you must run the diesels to power the generator.

The animal was so large that it is claimed it forced the U-boat to list greatly to starboard. “Every man on watch began firing a sidearm at the beast,” Krech is believed to have said, telling how the battle continued until the animal dropped back into the sea. In the struggle, though, the forward deck plating had been damaged and the sub could no longer submerge. “That is why you were able to catch us on the surface,” the Captain is said to have concluded.

As excuses for surrendering go, it's a corker.

Gary Campbell, who revels in the title of “Keeper of the Official Sightings Register of the Loch Ness Monster”, told Scottish Power: “History has shown that there have been consistent reports of large ‘monsters’ not just in lakes and lochs like Loch Ness but out in open waters as well. For many years the giant squid was known as the fearsome Kraken and given the size of the oceans, it wouldn’t be a surprise if many large species were still to be discovered.”

Legendary underwater archaeologist and naval historian Dr Innes McCartney, who worked with Scottish Power during their surveying, said: “In the waters of the Irish Sea there are at least 12 British and German submarines known to have sunk and potentially others whose actual sinking area remains a mystery. Unless a diver can find a shipyard stamp, we cannot say definitively but yes, we’re certainly closer to solving the so-called mystery of UB-85 and the reason behind its sinking – whether common mechanical failure or something that is less easily explained.”

As for the project that found UB-85? The Western Link is a 385km 600kV DC cable running between Ardneil Bay, Ayrshire, and Leasowe on the Wirral. It will be capable of carrying up to 2.2GW and is said to be the longest HVDC cable of its type in the world. To prevent interference with fishing vessels' nets it will be buried 1.5 metres deep in the seabed. UB-85's wreck is about 120m north-west of the cable's route. ®

UB-85 was not the only German submarine to sink after a crew snafu. The terrible tale of U-1206's toilet gas snafu should be a warning to all submarine crews about the dangers of crimping one off beneath the waves.

On 14 April 1945, the boat was quietly cruising at a depth of 200ft only 8-10 miles off Peterhead, Scotland, when the commander, Kptlt. Schlitt, decided to use the toilet without consulting a rating trained in its operation (the procedure was complicated). Something went wrong, and when the specialist arrived he misunderstood the situation and opened the wrong valve, which resulted in large quantities of seawater entering the boat. The water reached the batteries directly under the toilet, causing the production of chlorine gas, and the boat was forced to surface immediately; unfortunately right underneath an enemy aircraft. The crew managed to clear the gas by blowing clean air into the boat, but were at the same time bombed by the aircraft, causing extensive damage which left U-1206 unable to dive. Considering the hopeless situation, Schlitt had no choice but to destroy the secret material and order Abandon Ship to save his crew.

Och aye! It's the Loch Ness Monster – but only Apple fanbois can see it

'Video on internet may not be entirely truthful': Times headline

Release pushed back until 2013

ATI to drop Down Under next week