The status of the Schiaparelli probe remains uncertain, leaving scientists at the European Space Agency baffled after the lander’s signal cut out unexpectedly.

At a press conference this morning, ESA’s Director General, Johann-Dietrich Wörner, said the agency has not explicitly ruled the landing process as a fail, and is in the process of analysing heaps of data taken from the sensors onboard Schiaparelli.

After the ExoMars Trace Gas Orbiter (TGO) entered Martian orbit, Schiaparelli separated from its mother ship on 16 October and was due to land on the planet’s surface yesterday.

The landing process is an automated careful sequence of events to ensure the probe hits the surface with a gentle plop. A heat shield, rocket thrusters and a parachute are used to slow the speed of the probe’s descent as it hurtles through Mars’ atmosphere. 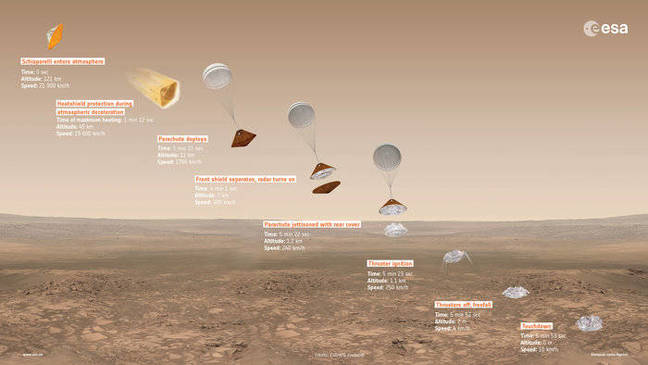 It’s a tricky manoeuvre. Not only does it require skill, but also a bit of luck to pull off successfully, Wörner said. However, the odds weren’t in ESA’s favour yesterday and the signal from Schiaparelli was lost for about 50 seconds before it was due to land.

Since then, there has been no contact with the probe. ESA said it may try to communicate with Schiaparelli by resetting its transceiver. However, if everything but the transceiver was in working order, the probe only has enough power to remain alive for just four to ten days.

Scientists need more time to sift through the data relayed from Schiaparelli’s sensors to TGO to analyse the whole sequence of events during the landing phase, Accomazzo said.

Wörner said he had received suggestions to drive NASA’s Curiosity rover to the location of Schiaparelli and direct its camera to the landing site to inspect Schiaparelli. But the distance Curiosity would have to travel is “a little bit too far”, Wörner added.

It is unknown if the probe crash-landed on to Martian soil and if it is still in one piece.

It’s not the best start to the ESA’s and Russian space agency Roscomos’ joint ExoMars mission. Both agencies will have to be more careful when it plans to deliver a European rover and a Russian surface platform to Mars in 2020 – which it still has yet to secure funding for.

Wörner said he was confident, however, that the possible demise of Schiaparelli has not destroyed the agency’s plans completely. He called the TGO a “cornerstone” of the ExoMars mission and was happy to confirm that it had entered Martian orbit successfully and is collecting data.

“So that means the TGO is ready for science, and at the same time, ready for data relay which we need for the 2020 mission.”

ESA’s Director of Human Spaceflight and Robotic Exploration, David Parker, closed the conference and said: “Mars exploration is hard and that’s the reason we do it”. ®