Pic The European Space Agency has spotted what it assumes is what's left of its Schiaparelli lander that smashed into the Martian surface this week.

NASA has been helping its European cousin out with use of the Mars Reconnaissance Orbiter (MRO): the satellite's low-resolution CTX camera has picked up two new objects on the surface of the Red Planet, relatively close to where Schiaparelli was supposed to touch down. Contact with the lander was lost just minutes into its descent attempt.

The first object is relatively bright and looks like the 12-metre parachute that was the first stage in the landing process for the probe. The parachute was built to slow Schiaparelli down from 1,700KPH to 250KPH before detaching and allowing the probe to make the final descent under rocket power.

The second new feature is a much darker spot about 15 by 40 meters across and about 1km north of the first object. ESA boffins think that this is all that remains of Schiaparelli after its engines cut off prematurely and left it in free fall. 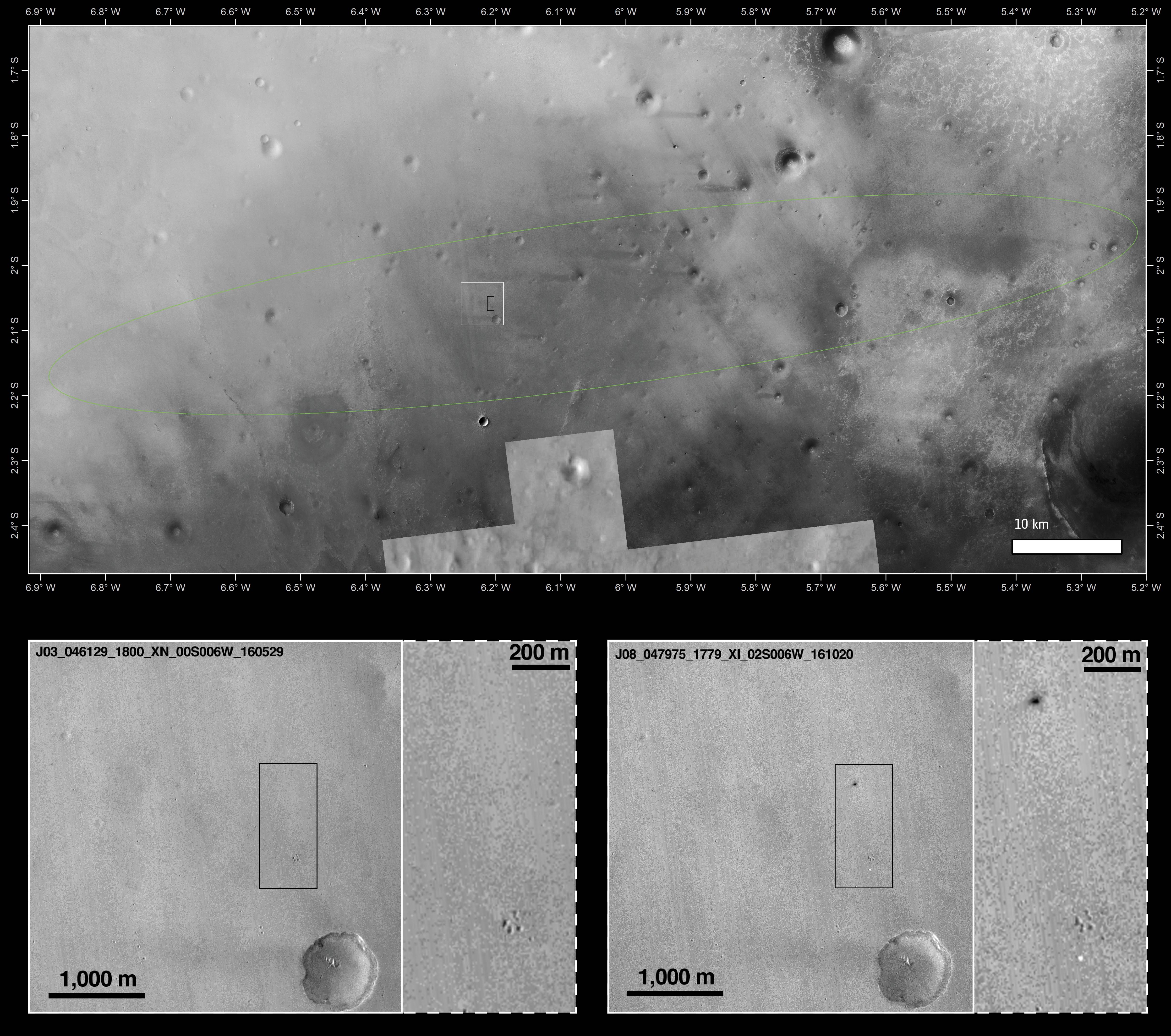 Schiaparelli's landing ellipse in the top picture, and the before and after images of the surface showing the new features (click to enlarge)

"Estimates are that Schiaparelli dropped from a height of between two and four kilometers, therefore impacting at a considerable speed, greater than 300 km/h," ESA said.

"The relatively large size of the feature would then arise from disturbed surface material. It is also possible that the lander exploded on impact, as its thruster propellant tanks were likely still full."

The crash site is 5.4KM west of its intended landing point, well within the nominal 100KM x 15KM landing ellipse that ESA had planned. The MRO will make another pass over the site next week and its high-resolution HiRISE camera will take more detailed pictures of the area.

While ESA is still analyzing the data, it looks likely that Schiaparelli's heat shield and parachute worked as planned, but that its rocket motors malfunctioned and shut down after only a minute of use. Gravity then did the rest.

The Europeans aren't going to be too cut up about the failed landing. Schiaparelli was only supposed to last a few days anyway, and one of its primary purposes was to act as a test run for a more ambitious landing later.

Mars is a real pain to land on, much more so than the Moon. The Red Planet's tenuous atmosphere is just thick enough to heat up objects via compression shock and some friction when they try to land. At the same time it's too tenuous to allow a soft landing by parachutes.

Hopefully, once the data is decoded and new images of the crash site received, ESA can work out exactly what went wrong. Once that's done it'll be back for another shot at it in the coming years. ®