Gartner has published a distributed file systems and object storage magic quadrant with the top three suppliers being Dell EMC, followed by IBM and Scality.

The research consultancy defines distributed file systems and object storage as "software and hardware solutions that offer object and/or scale-out file technology to address requirements for unstructured data growth and based on 'shared nothing architecture'."

We're going to assume you are aware of the Magic Quadrant's 4-box structure and 4-way supplier classification, and will move on to the meat of the MQ.

Apart from the top three, there are no other entrants in the Leaders' box. Hitachi Data Systems is the only challenger and Red Hat and SwiftStack the only visionaries.

Just over half of the suppliers in this MQ, seven of them, are in the Niche Players quadrant; NetApp in pole position, followed by Cloudian, DDN, SUSE, Caringo, Panasas and finally Huawei. 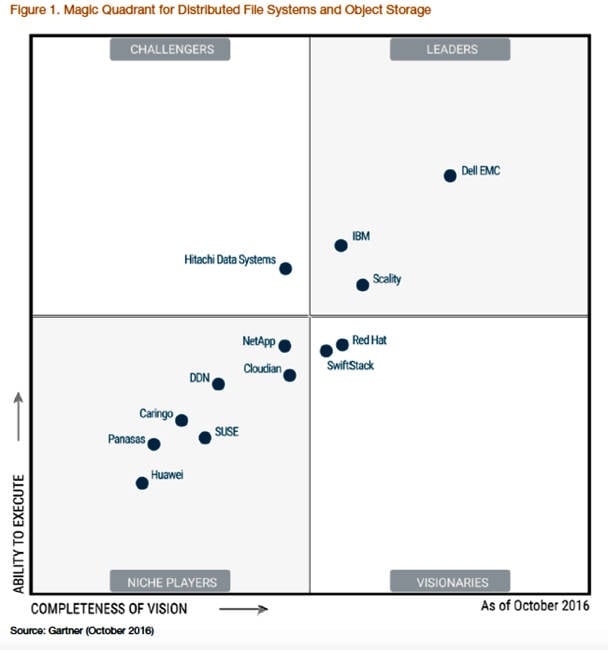 The second caution point is a phrasing gem. Other, harsher judges might well have phrased it using much more basic language, perhaps referring to the rear outpourings of male bovines.

This concerns the Isilon and Elastic Cloud Storage (ECS)products.

The second caution is pretty much negated by the recent announcement of the Isilon All-Flash system.

This concerns Ceph and Gluster.

There we have it; Gartner's magic quadrant summation of 13 scale-out file storage and object storage vendors. It is still early days, in an enterprise sense, for deployments of such systems and we'll probably see substantial placement changes in the next edition of this MQ. ®