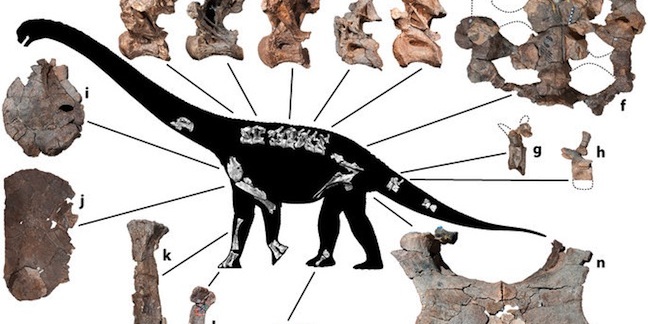 As detailed in the Nature: Scientific Reports paper New Australian sauropods shed light on Cretaceous dinosaur palaeobiogeography, the dinos are remarkable because they are the first sauropods to be found in Australia.

Brontosaurus, Brachiosaurus, Diplodocus* and Apatosaurus are other members of the sauropod family, most often associated with the late Jurassic period. Savannasaurus elliottorum shares the above-named beasties' height, long neck and thin hips: the creature was probably 12-15 metres long and about 1.5m across the beam. But it looks to have lived in the Cretaceous, about 105m years ago.

Both of the new dinos also appear to be more like South American dinosaurs than others found in Australia. That helps theories suggesting that as continents drifted and climate changed, dinosaurs went with the flow, through South America, across Antarctica and into the then-friendlier climes of central Australia where Savannasaurus elliottorum and Diamantinasaurus matildae kept the Sauropod race alive as a new breed of Titanosaurs

Our guess at Savannasaurus elliottorum's size is based on the 20 to 25 per cent of the skeleton, depicted above (see above or here on mobile devices), that dinoboffins have been able to dig up from a site in central Queensland.

That site gave the dino its name: Savannasaurus refers to its likely habitat while elliottorum refers to David Elliott, a grazier and chairman of the Australian Age of Dinosaurs Museum (AAOD) in Winton, Queensland, who found the bones while mustering sheep in 2005.

Diamantinasaurus matildae is notable because it offers the first sauropod skull ever found in Australia. The presence of two sauropods further advances the idea that the beasts migrated across continents, taking advantage of connections now lost to time. ®

* Yes, this is controversial

Spontaneous offer made during chat about vaccines (which - phew! - Trump seemed to like)