What will happen when I'm too old to push? (buttons, that is)

Something for the Weekend, Sir? I'd like you to consider my underwear.

As we move inexorably towards another Christmas – for American readers, I understand you prefer the euphemism "Holiday Season" for its more generous syllable-count – close relatives have begun asking what gifts I might like to receive on the big day.

What I want, of course, is toys. Being a grown-up, however, these normally take the form of unnecessary gadgets and landfill-destined electronics.

That way, I will be happily entertained by my shiny new thing for the remainder of the festive period. As a child, it would be astronaut figurines; as an adult, it's anything with a glowing LED.

Harking back to a particularly memorable day of Christmas Past, I once managed to occupy myself until late into the afternoon fiddling with my favourite present: a smartphone battery recharger pack.

I wanted to catch the glorious moment when the blinking red charging lamp switched to a continuous green. Oh such joy and goodwill to all men!

Not that family members should be trusted with the task of purchasing such gifts themselves. Instead, I buy them in advance and store them in a cupboard upstairs. Just pick one, I say, and wrap it up for me.

None of my family enjoy receiving gifts of this nature from me, either, on the spurious grounds that they "have no use for them". For reasons that never fail to baffle, they are either masterly actors or are genuinely pleased to receive gift tokens I buy them from shops that sell woven fabrics and odorous liquids.

This year is different. The Dabbsy Christmas cupboard contains a solitary pre-purchased electronic product... and a small stack of books.

I fear this is a sign that I am getting old.

Old people in general don’t like gadgets, you see. That’s because they’re old.

Old people don't like anything new. For example, they don't like buttons to be in different places to the last thing they used that had buttons on it. They fail to see the wonder in the mysteries of complexity and refuse to engage with disruptive technology.

And they are entirely cool with the idea of reading instructions printed at 3pt Times New Roman in Chinglish and five other languages on a strip of paper smaller than the gift tag that had been affixed to the present itself. Oh dear. Old people, eh?

It's not a generational or millennial thing, either. The brave new world of digital discovery and rapid technical development that we enjoy today was created by people who are getting older – every day! Many of them are very old already.

Those who aren't yet dead as a result of being too old have all slowed down their tech uptake. For example, you don't see old people in sleeping bags outside PC World queueing up to buy the first Google Pixel.

OK, so this was because there weren’t any queues for the Google Pixel, buy you get the idea: old people are even challenged by a flip-phone.

Even those who got rich out of technology by fleecing consumers and evading tax always seem to end up handing their billions of dollars to philanthropic projects before going off to live on a farm, raise weasels, and shit in a bucket.

What I think happens is that you reach a point in your life when you simply can't be arsed any more. And I’m worried that I might be getting close. 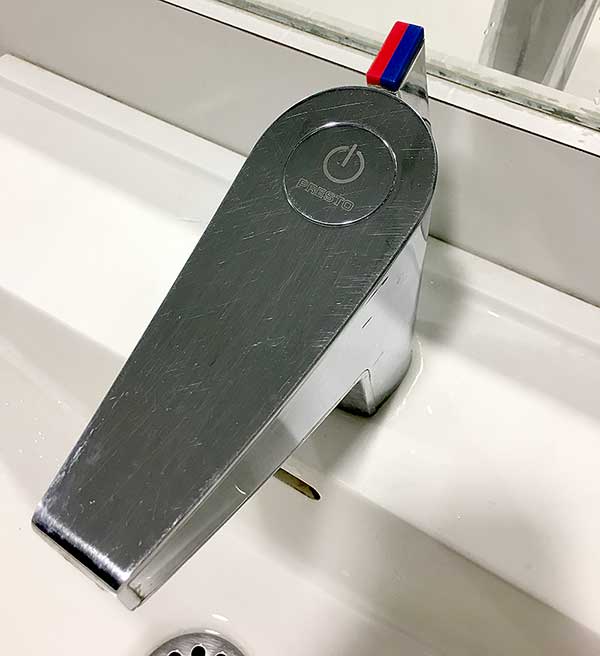 How do old people navigate a brave new world that keeps getting braver and newer at an accelerated pace? For example, consider the operational labelling on this public toilet tap (right).

I thought it was clever and funny but what the heck is your average old git supposed to make of it? Because that old git will be me soon enough.

In fact, signage is an excellent discerning identifier between age ranges. Young people like things to be bold, summarised and quick to note. Not so for crusty geezers like me. We love to go on and on.

Imagine you wanted to dissuade passing pedestrians and late-night revellers from relieving themselves in your doorway. You’d put up a sign saying something like "Private Property" or "CCTV", right? 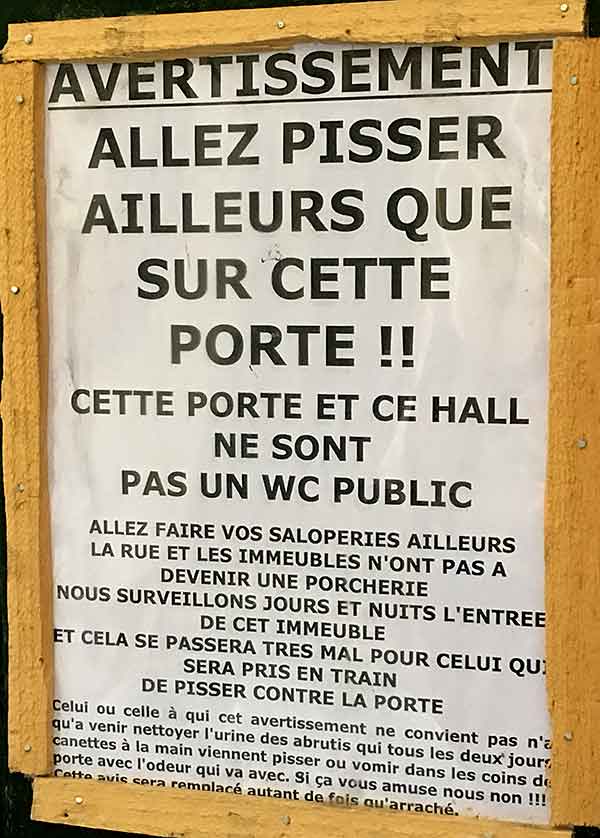 Not so for old people. Here’s a makeshift sign I spotted outside a doorway in central Montpellier a couple of weeks ago. It could have been written by un vieux.

[TRANSLATION: Warning. Go piss somewhere else other than on this door. This door and hall are not a public toilet. Go do your filth elsewhere. The street and buildings are not to become a pigsty. We are watching the entrance of this building day and night, and things won’t go well for those who are caught pissing against the door. Anyone unhappy with this warning can just come and clean up the urine of those morons who every couple of days, beer can in hand, piss or vomit into the corners of doors along with the accompanying smell. If that amuses you it doesn’t amuse us. This notice will be replaced as often as it is torn down.]

It makes you wonder whether the author of this sign might have continued for several more sentences if only the sheet of paper had been bigger.

Unfortunately, this is the person that I might become. My days of carefree gadgetry are numbered and it makes me sad.

Not even Spark, Rubik's hopelessly lame attempt at reinventing his eponymous Cube for the simwit age, raises the slightest spark (ho ho) of interest. I'll probably pick it up and put in down after 30 seconds. Hand me a classic Rubik’s Cube, however, and I'll be incommunicado for weeks.

So this year, please, think about my underwear instead.

I need new socks and underpants, you see, and for some reason I feel these will be more important in the months after Christmas than a wireless trackpad.

I fear my ageing brain is gradually heading offline.

We have a random on the west side. Personality malfunction.

We have a technical.

Alistair Dabbs is a freelance technology tart, juggling IT journalism, editorial training and digital publishing. He reckons that if you believe anything he writes in his Reg columns, you would believe anything. In fact, you might be interested in becoming an angel investor in a social media disrupting video Blockchain app launch he has planned that will certainly overtake Facebook and God after six months. FBI Update: 17kg.

But will Fortnite be allowed back into the walled garden in the meantime?