Hitachi ups its array game with new hardware and software

Its Virtual Storage Platorm F (VSP) products are all-flash arrays with the G series being hybrid - both flash and disk. The new, high-end VSP F1500 quadruples the cache, doubles the previous high-end systems bandwidth and more than triples its I/OPS. 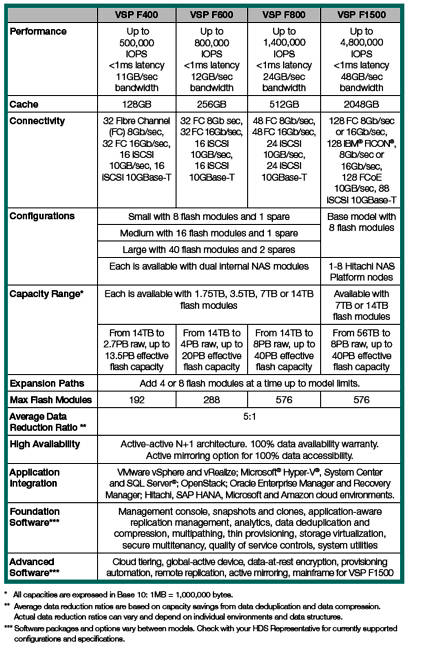 HDS says the VSP F1500 has superior price/performance value, and is for enterprise customers looking to consolidate IT across block, file and mainframe operations.

The refreshed FMDs use MLC (2bits/cell) NAND, not TLC (3bits/cell), and have SAS interfaces, not using PCIe. Older, gen 1, 1.7TB and 3.2TB FMDs have a 6Gbit/s SAS interface. All the other and later drives use 12Gbit/s SAS.

The new FMDs have built-in, in-line compression using a VLSI engine and a derivative of the LZ77 algorithm. Compression can be distributed and managed across a system's set of FMDs. There is an enhanced Flash Translation Layer and this, HDS claims, together with the compression, delivers up to 80 per cent data reduction (typically 2:1) at 10 times the speed of competitors. It says this is because each FMD provides its own compression engine, giving HDS the ability, it claims, to easily provide five times, even ten times, the data reduction processing capabilities of other, traditional all-flash arrays.

HDS says these FMDs have the ability to prioritise application I/O requests over background tasks such as garbage collection, to minimise potential latency.

FMDs come in 12 drive/2U trays, with more than 338TB effective capacity per tray, and HDS claiming I/OPS performance is up to five better per FMD than enterprise SSDs.

The new flash modules have enabled a capacity increase for the existing VSP F400, F600, and F800 products:

A possible fourth-generation FMD could use TLC flash chips with an NVMe interface to increase both capacity and I/O performance further. This time next year 30TB 3D TLC NAND SSDs will likely be available and HDS could build gen 4 FMDs from the chips used in such drives. 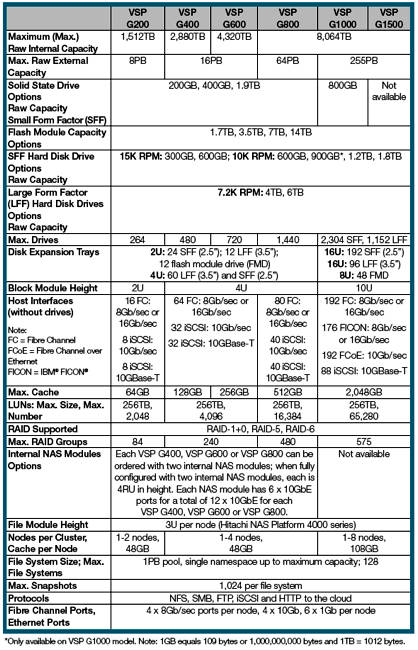 Here is the new VSP G series capacity picture with the G1500:

The latest v7.0 version of SVOS, the VSP operating system, has an improved flash-aware I/O stack.

It has enhanced QoS to prevents workloads from monopolizing bandwidth and dedicates data reduction services to workloads for more predictable latency than other all-flash arrays.

SVOS, QoS and VVOLs are integrated so that specific resources can be allocated to virtual machines, including FMDs, so that the VMs get dedicated FMDs for managing compression.

There is support for all-flash cloud tiering, which provides transparent file migration to private or public cloud storage for more predictable costs and faster transitions to all-flash.

Hitachi has Dynamic Tiering and also Tiered Storage Manager software. The firmer promotes/demotes data, at sub-LUN or page level, in tiered storage systems, according to its IO acccess rate. The most active data is moved to the highest-performance tier. Less active data gets down-tiered.

An active flash mode moves suddenly active data via synchronous promotion to higher-performing tiers in real time, with HDS claiming that access latency changes from seconds to sub-second times. Pages in flash memory that exceed thresholds for heavy write-I/O can be demoted to preserve flash endurance.

HDS VSP arrays have in-array tiering and tiering to "the cloud" via a data migrator feature - "the cloud" meaning, for example, on-premises and Hitachi Content Platform (HCP) or the Azure and Amazon S3 public clouds. Data can be migrated from VSP G400, G600 and G800, plus the Hitachi NAS Platform 4x00 to such targets.

Migration can be policy-driven, down to folder, file type and access time points.

Existing VSP G1000 customers can upgrade to the G1500 via data in place, non-disruptive migration.

SVOS 7.0 is available on all new and existing VSP G series and F series systems. Existing customers can take advantage of SVOS 7.0 and its deduplication and compression features through a non-disruptive upgrade. ®

It's mostly an IoT-centric system integrator now, but may sprout new scale-out arrays

What the HEC? HDS claims it has a big *aaS

BaaS, AaaS and DRaaS joined by STaaS and CaaS