Benioff on being hacked: We're looking into some next-gen fax machines 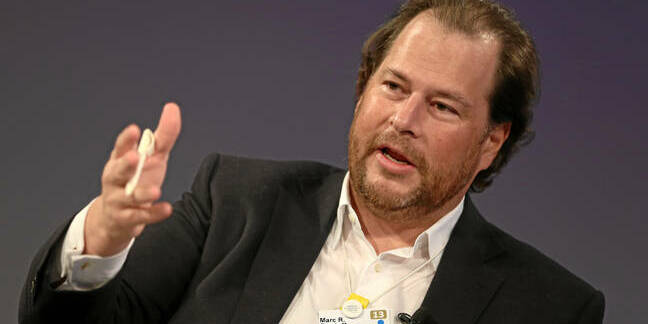 Marc Benioff is many things. But a whiner is not one of them.

Asked on stage today at the Intel Capital Global Summit about the hack of Salesforce board member Colin Powell and the resulting release of the company's highly confidential mergers and acquisition strategy, Benioff was surprisingly upbeat.

"On one level, it was great: our investors saw that we run a clean ship. And that our M&A strategy is well thought through."

Indeed it is: the 60-page internal presentation showed that Salesforce was looking at 14 possible companies ranging from Adobe (cost: $53.7bn) to automation software company Pegasystems – a steal at just $2.3bn. It was a thoroughly professional job, as you can see for yourself.

"We are in somewhat unchartered territory though, when a board member of a public company has his email hacked and board-level strategies are made public documents," Benioff noted. "It's a little uncomfortable."

Asked what he was doing in response, he joked: "We're buying fax machines. We see a big opportunity in next-generation fax machines."

It's not the only area where the larger-than-life CEO finds conflicts cropping up. Salesforce has managed to protect its hold on the market for customer-facing CRM (customer relationship management) software through a number of smart moves, not least of which was turning its cloud software into a platform and encouraging others to build their applications on top of it.

That has occasionally resulted in the odd situation where the company ends up competing with its own customers and sometimes with itself. "It's always an uncomfortable situation," confesses Benioff.

His solution? "Our number one thing is to provide a fair playing field." He gives the example of a company Salesforce acquired (SteelBrick), which operated in the same space as one it had invested in. The solution? Point out to the second company that there's plenty of space outside of SteelBrick's specialist field.

Benioff also acts as an angel investor in startups and has in the past found himself with shares in a company that Salesforce intends to buy. In one case, he simple gave his shares to the University of California, San Francisco (UCSF) before the company bought it. But now, he admitted, he has to run every potential investment past the Salesforce board before he can act.

Why UCSF? Because it is one of the many organizations that Benioff has given hundreds of millions of dollars to over the nearly two decades he has been in charge of the CRM juggernaut – you can see his name on the sides of children's hospitals in the Bay Area in return.

And tears wraps off yet another alleged Arm killer: this time, low-power x86 Tremont cores

Yay, Intel chip shortages should be over soon! Nope. Strap in, at least another quarter or two to go, say PC execs

Disruption is back, baby! 'We've all taken a dramatic base pay cut' beams boss of Intel's tech cash-injection wing

Chipzilla has to go it alone or turn to a partner