Who needs an escape key when you've got high-res emoji buttons?

The new models, offered in 13-inch (33-cm) and 15-inch (38-cm) flavors, will be the first to sport the Touch Bar, a small Retina display strip that will sit just above the number keys in an area previously occupied by the escape, function, and power buttons.

The Touch Bar, which will also house a Touch ID button for fingerprint authentication, can be programmed for application-specific keys and controls, allowing for bookmarks, shortcuts, or dial controls to be shown on the keyboard unit.

The bar had been discovered earlier this week when images were found deep within a macOS update.

In addition to the death of the escape button and function keys, Apple's new MacBook Pro lineup will sport a quad-core Intel i7 (in the 15-inch model) or i5 (13-inch model) processor and AMD Radeon Pro graphics hardware, a move that could irk developers who code for Nvidia's CUDA platform with the previous Nvidia-equipped models.

The new MacBook Pros will also sport a thinner and lighter design, with the 13-inch model being 14.9mm thick and weighing 3lb (1.36kg), while the 15-inch model is 15.5mm thick and weighs 4lb (1.81kg). Both models provide a battery life of up to 10 hours and are equipped with either two or four Thunderbolt ports. 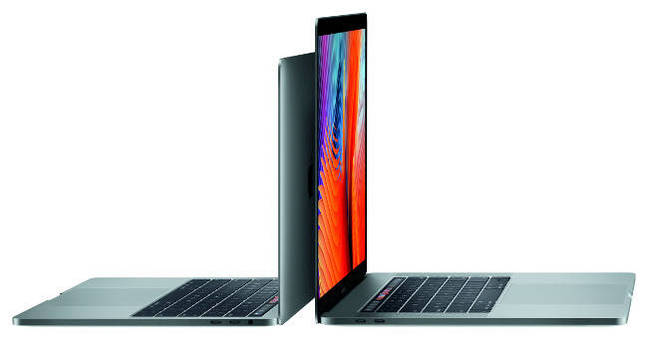 In talking up the new notebooks, Apple CEO Tim Cook was hardly modest, proclaiming that "[the Mac] is not just important to us, it's important to the world. The world's creative forces use the Mac to push the world forward."

In this latest case, they will have to wait 2-3 weeks to push the world forward, though pre-ordering is now open. In addition to the Touch Bar-equipped notebooks, a non-touch version of the 13-inch MacBook Pro is also being offered and is now shipping for online orders. The touchless 13-inch model starts at $1,499, touchless 15-inch at $1,999.00, while the Touch Bar 13-inch starts at $1,799 and the 15-inch is $2,399.

Apple also used the Thursday event to unveil a new version of the TV app for the Apple TV as well as iPad and iPhone. Execs say that the new TV app will organize all the video content both streaming on-demand and live TV apps through a single interface with Siri voice and remote integration.

That update is due to arrive by the end of the year as a patch for the Apple TV firmware and iOS. ®