Which is nice, but they offer ambiguous clues about the mission's failure

The image below shows the failed lander's front heatshield, parachute and rear heathshield.

The ESA says it's confident the image shows the front heatshield even though it offers a “mottled bright and dark appearance”. That's been “interpreted as reflections from the multilayered thermal insulation that covers the inside of the front heatshield.” The agency's not calling it just yet, but does say “Further imaging from different angles should be able to confirm this interpretation.”

As for the “dark features around the front heatshield”, they're “likely from surface dust disturbed during impact.” Separation of the front and rear heatshields was expected, as the former was ditched before the latter.

Previous pics from Mars thought to depict Schiaparelli's 'chute have now been confirmed, but the extra detail in the images captured on October 25th show it is still connected to the rear heatshield. The mission plan called for the two to stay together, so again there's confirmation that plenty went right. 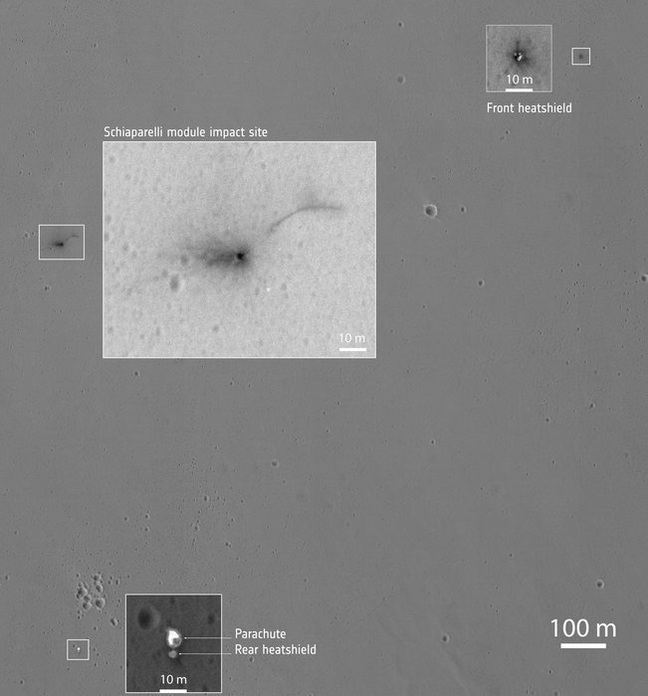 Zooming in on Schiaparelli components on Mars. Image - ESA via NASA

The ESA has also revealed that it has been able to recover data from the “longer-than-expected ‘gap’ of two minutes in the telemetry during the peak heating of the module as it entered the atmosphere.” Mission boffins thought they'd lost contact for just one minute, but have since recovered half of the “missing data.”

Analysis of that newly-acquired dump has ruled out “any problems with this part of the sequence.”

“The latter stages of the descent sequence, from the jettisoning of the rear shield and parachute, to the activation and early shut-off of the thrusters, are still being explored in detail,” the ESA's latest public announcement says, adding that “a report of the findings of the investigative team is expected no later than mid-November 2016.”

Other mysteries are also occupying the ESA's attention, including “asymmetric surrounding dark markings” near the lander's crater. The shape of the markings suggests a low incoming angle and a very rapid approach. But Schiaparelli should have been almost vertical and rather slower than is indicated from the ejecta we've seen so far. Another scenario being considered is an explosion of the lander's fuel, as that could have spread Mars-stuff in all sorts of directions and produced effects expected from higher-speed or differently-angled impacts. ®