Intel has released a tiny, single-sided and heavily read-optimised SSD for server use in data centres.

However, the TLC use tends to mean devices are optimised more for reading data than writing it, TLC NAND having a lower endurance than MLC (2bits/cell) flash. Typically servers are not so limited for space and 2.5in SSDs are the norm. Intel is hoping that space-constrained servers with read IOs more important than write IOs will be a viable market for its P3100 SSD.

Its random read/write IOPS are up to 114,000/10,000 and the sequential read/write bandwidth numbers are up to 1.8GBps and 175MBps. This performance profile is heavily optimised towards reading data.

It supports 0.5 drive writes per day (DWPD) for three years, 0.3 DWPD for five years, and has a five-year warranty. The product draws 10mW in its idle state, which Intel says is 90 per cent less than a typical enterprise disk drive, and averages 5.5W when active.

However, there is no power-loss data protection, although the drive does have AES-256 bit encryption.

Data centre applications for the P3100 include being a boot device, search indexing, edge caching and web hosting according to Intel.

For comparison, Intel's M.2 format 600p SSD is a client device, meaning notebook and tablet primarily, NVMe SSD with the same 3D TLC NAND media, capacity levels and 1.6 million hours MTBF rating as the P3100. Its random read/write IOPS are up to 155,000/128,000 and the sequential read/write bandwidth numbers are up to 1.8GBps and 560MBps. This has a nominally faster random read IOPS number and much, much faster random write write IOPS value; it being more balanced in its performance. 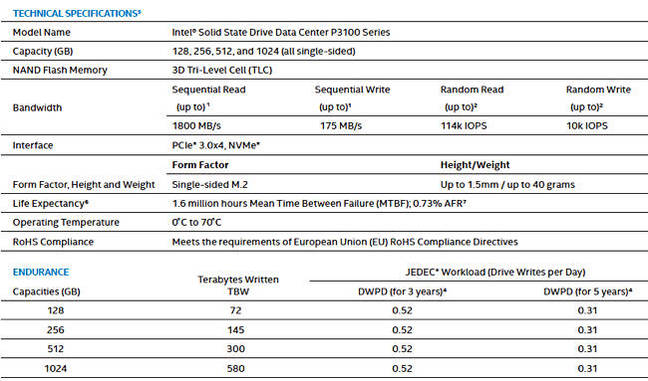 The performance numbers are:

That makes it slower than the P3100 at reading but faster than writing.

When the next generation 3D NAND comes around the block from Intel (and Micron) then we should get 2TB M.2 SSD capacities and that should enable faster write IO and longer endurance in DWPD terms, both of which could endear the format more to server suppliers than this 1TB toe in the data centre water.