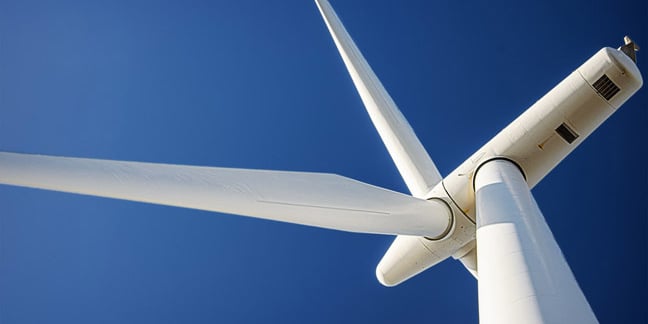 Wind turbines are well known for their harmful effects on birds and other airborne wildlife. Pic: Shutterstock

Amazon has taken on a stalled wind farm project in Ohio to power its data centres because, as we all know, intermittent and flaky power supplies dependent entirely on the randomness of the weather are just what mission-critical data centres need.

"We remain committed to achieving our long-term goal of powering the AWS Cloud with 100 per cent renewable energy," said AWS infrastructure veep Peter DeSantis, in a canned missive which was read at Vulture Central on a computer connected to a power grid with a whopping 7 per cent of its input supplied by wind, despite this being late autumn.*

The wind farm will be built by US firm Everpower, whose CEO Jim Spencer said in another canned quote: "We applaud Amazon's goal to power the global infrastructure for the industry-leading AWS Cloud with renewable energy" – while conveniently not mentioning that he has Amazon to thank for ensuring that the entire project was going ahead at all.

Local newspaper the Columbus Dispatch says the wind farm "was being planned by developers for years before Amazon's involvement. It may have been stalled if not for the internet company's commitment to buy electricity for the project."

The wind farm will supply juice for AWS data centres across central Ohio and north Virginia, the paper tells us.

Another local paper, the Urbana Citizen, reports that opposition to the farm was so strong that it was dragged up to the Ohio Supreme Court before being dismissed in December last year after Everpower reportedly reached a settlement with disgruntled residents not to build 60 of the planned 170 turbines.

The 189MW project is scheduled to start delivering its occasional blips of 'leccy sometime next year. ®

That 7 per cent statistic – 7.18 per cent on a distinctly average November day – comes to us courtesy of the excellent Gridwatch website, which tells you exactly what sources are supplying Britain's wiggly amps at any given moment.

For the record, nuclear sources were supplying a fraction over 20 per cent when this story was written, while gas turbines provided more than half the effort to keep Blighty's lights on.

Great Scott! Bitcoin to consume half a per cent of the world's electricity by end of year

Blame of thrones: Those viral vids of PC monitors going blank when people stand up? Static electricity from chairs

Who, me? Client was silent on critical network details and little things like multi-tenancy

Silicon can now reconfigure itself with just a jolt of electricity