Arch Linux: In a world of polish, DIY never felt so good

Dig through the annals of Linux journalism and you'll find a surprising amount of coverage of some pretty obscure distros. Flashy new distros like Elementary OS and Solus garner attention for their slick interfaces, and anything shipping with a MATE desktop gets coverage by simple virtue of using MATE.

Thanks to television shows like Mr Robot, I fully expect coverage of even Kali Linux to be on the uptick soon.

Arch gets very little coverage for a several reasons, not the least of which is that it's somewhat difficult to install and requires you feel comfortable with the command line to get it working. Worse, from the point of view of anyone trying to appeal to mainstream users, that difficulty is by design - nothing keeps the noobs out like a daunting install process.

It's a shame, though, because once the installation is complete, Arch is actually - in my experience - far easier to use than any other Linux distro I've tried.

But yes, installation is a pain. Hand-partitioning, hand-mounting and generating your own fstab files takes more time and effort than clicking "install" and merrily heading off to do something else. But the process of installing Arch teaches you a lot. It pulls back the curtain so you can see what's behind it. In fact it makes the curtain disappear entirely. In Arch, you are the person behind the curtain.

In addition to its reputation for being difficult to install, Arch is justly revered for its customizability, though this is somewhat misunderstood. There is no "default" desktop in Arch. What you want installed on top of the base set of Arch packages is entirely up to you. 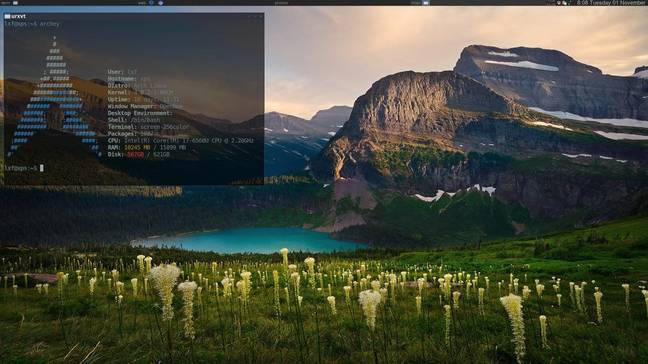 While you can see this as infinite customizability, you can also see it as totally lacking in customization. For example, unlike - say - Ubuntu there is almost no patching or customization happening in Arch. Arch developers simply pass on what upstream developers have released, end of story. For some this good; you can run "pure" GNOME, for instance. But in other cases, some custom patching can take care of bugs that upstream devs might not prioritize.

The lack of a default set of applications and desktop system also does not make for tidy reviews - or reviews at all really, since what I install will no doubt be different to what you choose. I happened to select a very minimal setup of bare Openbox, tint2 and dmenu. You might prefer the latest release of GNOME. We'd both be running Arch, but our experiences of it would be totally different. This is of course true of any distro, but most others have a default desktop at least.

Still there are common elements that together can make the basis of an Arch review. There is, for example, the primary reason I switched - Arch is a rolling release distro. This means two things. First, the latest kernels are delivered as soon as they're available and reasonably stable. This means I can test things that are difficult to test with other distros. The other big win for a rolling distro is that all updates are delivered when they're ready. Not only does this mean newer software sooner, it means there's no massive system updates that might break things.

Many people feel that Arch is less stable because it's rolling, but in my experience over the last nine months I would argue the opposite.

I have yet to break anything with an update. I did once have to rollback because my /boot partition wasn't mounted when I updated and changes weren't written, but that was pure user error. Bugs that do surface (like some regressions related to the trackpad on a Dell XPS laptop I was testing) are fixed and updates are available much faster than they would be with a non-rolling distro. In short, I've found Arch's rolling release updates to be far more stable than anything else I've been using along side it. The only caveat I have to add to that is read the wiki and pay close attention to what you're updating.

This brings us to the main reason I suspect that Arch's appeal is limited - you have to pay attention to what you're doing. Blindly updating Arch is risky - but it's risky with any distro; you've just been conditioned to think it's not because you have no choice.

All of which leads me to the other major reason I embraced Arch - the Arch Philosophy. The part in particular that I find appealing is this bit: "[Arch] is targeted at the proficient GNU/Linux user, or anyone with a do-it-yourself attitude who is willing to read the documentation, and solve their own problems."

As Linux moves further into the mainstream developers seem to feel a greater need to smooth over all the rough areas - as if mirroring the opaque user experience of proprietary software were somehow the apex of functionality.

Strange though it sounds in this day and age, there are many of us who actually prefer to configure things ourselves. In this sense Arch may well be the last refuge of the DIY Linux user. ®