Pic The Curiosity rover has discovered what appears to be a partially melted meteorite and has been testing it out with its on-board laser.

The golf ball-sized nugget, dubbed Egg Rock, was spotted on the lower slopes of Mount Sharp in an area called the Murray formation, a dried-out lake bed on the Red Planet. After the control team spotted the oddity, the rover approached it for a better look using the Chemistry and Camera (ChemCam) instrument.

"Iron meteorites provide records of many different asteroids that broke up, with fragments of their cores ending up on Earth and on Mars," said ChemCam team member Horton Newsom of the University of New Mexico.

"Mars may have sampled a different population of asteroids than Earth has."

ChemCam fires a green laser at objects to stimulate electrons from different elements, and the spectrometer on the rover can then determine the composition of the target. In the case of Egg Rock, nine laser firings determined it is made up of iron, nickel, and phosphide – a chemical conglomeration usually found in metallic meteorites. 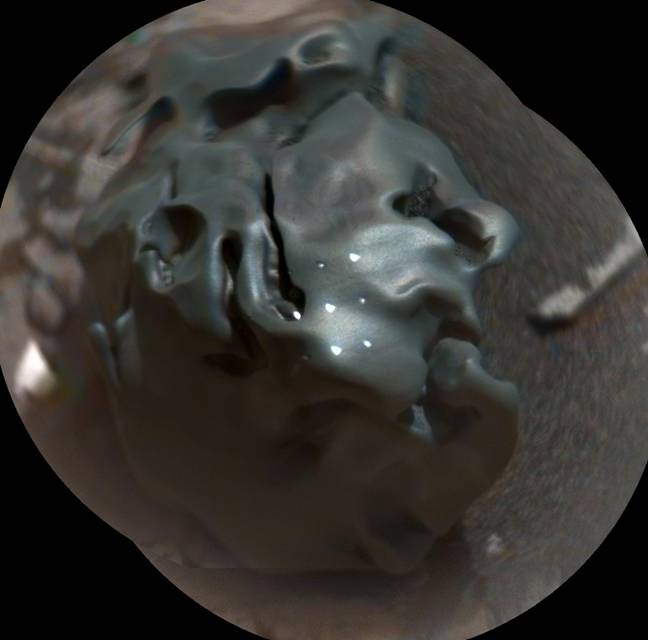 Meteorites like this rain down on Earth all the time, and many are discovered before the weather erodes them over time. Since Mars lacks the water and oxygen required to break down these fragments quickly, it's possible Egg Rock could be millions of years old.

Egg Rock isn't unique. Curiosity spotted a much larger iron meteorite in 2014, dubbed Lebanon, half buried in Martian sand. But it was back in 2005 that the first metallic meteorite was spotted by the Opportunity rover, which then nearly destroyed one of its drill heads trying to penetrate the object.

It has been nearly five years since Curiosity left Earth's gravity well, and the explorer was only built to last for a couple of years on the surface. At the time of the landing, NASA said that it expected the rover to last two or three times that lifespan, with good reason.

NASA is famous for over-engineering its hardware, and the results are sometimes spectacular. The Opportunity rover is still trundling across the Martian surface 12 years after landing, despite an expected lifespan of 90 days, and Curiosity is holding up well.

There have been problems. The wheels of the rover are suffering from the sharp, unweathered Martian rocks, and NASA controllers are trying to route Curiosity around the worst patches of terrain. But it also appears that some of the instruments the rover carries are feeling their age.

Curiosity's Dynamic Albedo of Neutrons (DAN) instrument – designed to find evidence of water – is suffering from falling voltage, the agency reports, and isn't generating the neutrons it once was. However, it is still useful in passive mode if these problems continue.

Reports on the Martian weather from the Rover Environmental Monitoring Station (REMS) are also somewhat degraded, with wind speed readings coming in sporadically. Temperature, humidity and pressure readings are all working normally, however.

Still, the rover is in amazing shape so far and should carry on producing good science for many years to come. While we on Earth suffer from manufacturing goods with planned obsolescence, NASA's approach is looking very good indeed. ®