'Particles up to ten billion times lighter than electrons' 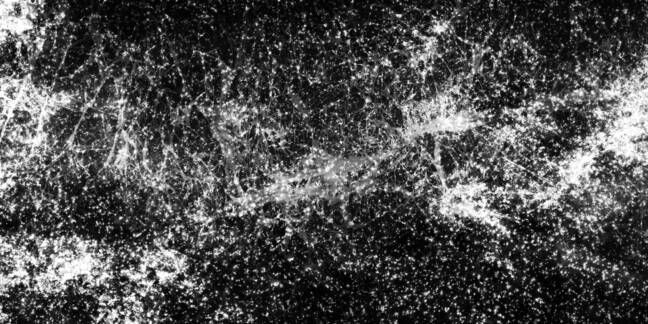 Boffins have calculated the mass of axions, which are a promising candidate for the mysterious dark matter loitering in our universe.

Axions are up to ten billion times lighter than an electron, according to new supercomputer simulations of the early universe.

With these figures in mind, scientists can now fine tune their search for axions when scanning the heavens. If they can detect energy readings that match these super-light axions, they may well have found axions and thus dark matter. To do this, they need to know the mass of the axions, which is why these calculations are important.

Astrophysicists studying various galaxies have found they have more mass than they should – and this extra bulk is attributed to dark matter. The notion that almost a quarter of the universe is filled with these mysterious particles, which have mass but emit no light, was proposed in the 1920s.

Almost a century later, however, there is still no evidence that these particles actually exist. Dark matter is notoriously difficult to find.

A paper published on Wednesday in Nature [paywalled], however, plans to help team axion knuckle down their search by providing physicists with an estimate of the particle’s mass.

If axions do exist and make up most of dark matter, their mass should be within the region of 50 to 1,500 microelectronvolts (μeV/c2) – up to ten billion times lighter than the electron (~0.51MeV/c2).

Using this estimate, every cubic centimetre of the universe contains 10 million of these super light-weight particles on average. But because dark matter is kept in clumps that form web-like structures, the local region of the Milky Way should have about one trillion axions per cubic centimetre.

The calculations are very tricky, and the team had to use JUQUEEN, a supercomputer at Germany’s Jülich Supercomputing Center, to model simulations of the early universe and crunch the numbers. Physicists used the equation of state and the temperature dependence of the “topological susceptibility of quantum chromodynamics.”

The equation of state shows the relationships between the amount of a particular substance in a given volume, pressure, and temperature. The “topological susceptibility of quantum chromodynamics” is much harder to understand.

It’s related to something called “time-invariance,” Professor Zoltan Fodor, a researcher at the University of Wuppertal, Germany, and coauthor of the paper, told The Register.

Topological quantum fluctuations in quantum chromodynamics result in a violation of time symmetry. “Certain processes should differ depending on whether they are running forwards or backwards,” Dr Andreas Ringwald, coauthor of the paper and researcher at Deutsches Elektronen-Synchrotron DESY in Hamburg, Germany, explained.

The researchers hope that this will help physicists hunt down axions, as it narrows the energy range they should look for.

“It would be extremely helpful to know what kind of mass we are looking for. Otherwise the search could take decades, because one would have to scan far too large a range,” Ringwald said.

Although their work concerns axions, not all researchers have ruled out the possibility that dark matter could be WIMPs.

“WIMPs are also quite possible candidates for dark matter. Axions, too. Me, personally, I do not have any preference, nature has chosen as it chose. Our job is to figure it out and look for all reasonable solutions.

“We have a fairly clear idea about the possible mass range for WIMPs and therefore we searched for them and did not find [them] (yet). We knew far less about the axion mass range. It is quite reasonable to search also for them,” Fodor told The Register.

The researchers also make another bold prediction. They reckon it should be possible to confirm or rule out axions in the next couple of years, depending on whether their axion mass prediction is correct. ®

Who bought the most powerful commercial supercomputer? Come on, it's Total-ly obvious

HP customers: If your spinoff can put a computer into space, why can't I have my Reverb?