Handling tech baggage: How American Airlines, US Airways merged IT

To bring the two airlines together, trust came before technology 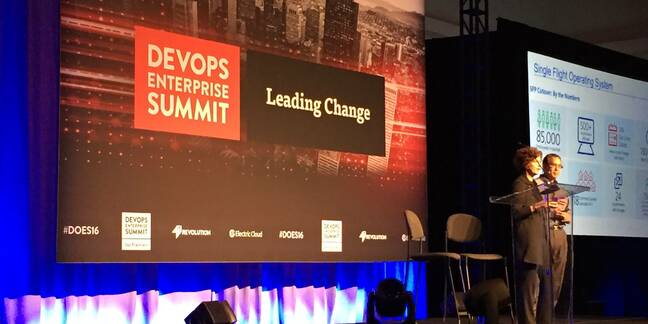 At the end of 2013, US Airways and American Airlines merged. But actually combining the IT systems of the two companies is expected to take from five to seven years, said Susanna Brown, managing director of operations technologies at American Airlines.

The two airlines move slowly because of baggage: They have different cultures and technology stacks, according to Brown.

Speaking at the DevOps Enterprise Summit in San Francisco on Monday, Brown and Ben Chan, director of shared services at American Airlines, described how integrating the two companies' IT systems has required finessing both technology and people.

"Moving forward with the integration work was as much an organizational change-management effort as anything else," explained Brown. "Mergers are the perfect vehicle to really foment a lack of trust. And trust was what we needed if we were going to get all of that work done."

The integration involves roughly 2,000 projects – about 1,200 of which are complete. It includes merging customer loyalty programs, obtaining FAA approval to fly as a single carrier, developing a new IT operations center for the combined company, and the unification of two customer reservation systems, to name a few of the things that must be done.

"For my organization, the epiphany that we couldn't just add more people to do the work came early in 2014 as we were planning out a project – the combination of our crew and flight management systems," Brown explained.

Normally, it would have taken about six months to build up the infrastructure for a new application, from development through production, said Brown. But her team had 26 new applications to deploy at the time, so a new approach was required.

"The good news is we had built quite a bit of trust equity with a lot of our cultural change, and we were able to introduce a lot of automation to accelerate the infrastructure delivery," noted Brown.

In any merger, said Chan, there's fear, uncertainty, and doubt. "People were afraid that the systems they know and love will not exist in the future. They're afraid of losing their jobs."

To allay those fears, Brown said her organization advanced the idea that anyone from any team could contribute to any other team from anywhere. "Being able to realize that vision really required our leaders and our teams to sit down and establish some common norms for how we were going to function," said Brown. "As we say in the South, we had to sing from the same hymn book."

Building a common sense of purpose among the merging airlines has involved collaboration tools like Jive, video conferencing systems, virtual whiteboards, and the like. But it also involves making employees feel good about their company.

"At the end of the day, we're really all social creatures," said Brown. "So having shared experiences really helps build bonds."

Where trust has made the move toward automation easier, the automation enabled by DevOps technologies makes life better for the roughly 5,000 people handling American's IT operations. For example, Chan described how the process of updating Red Hat Enterprise Linux across 200 nodes by hand takes about 17 hours.

"With Puppet, we can do that in about five minutes," he said. "It's not just about speed, it's also about consistency. And it's quality of life – we can set this to go off at night and we get a report in the morning."

Such is the company's affinity for automation that IT teams meet regularly for what Chan calls "automation challenges" to tackle specific problems. "One day a month, we all get together to tackle stories to further our strategy, to cut through bottlenecks, and to clean up technical debt."

Slack email notifications for .Net and Java development builds, for example, came out of these sessions.

For Brown, creating an environment of trust and collaboration makes the IT organization become more valuable to the business. "If we do all of that right, we believe we will definitely be the trusted advisor for our business. So as we move into the innovation phase, we'll be well positioned to deliver," she opined.

DevOps, said Brown, ended up being the answer to challenges presented by the merger. "Even though we had this lack of trust initially, the merger became a catalyst for cultural change within American, which really allowed for DevOps to take hold in our organization," she concluded. ®