IT administrators need to bear this in mind when configuring the device via MDM: make sure you set a default PIN.

Once you’ve got used to the phablet's size, it’s not a burden to carry. The weight is typical for devices this size – 19g lighter than the Lumia 1520 in fact. For field workers used to toting about a clunking industrial signature reader, say, or tablet, the Elite x3 will be immediately attractive.

With industrial users in mind, HP could have skimped on the imaging – in fact it tried quite hard to build in a respectable 2016 camera into the x3. I’ll go into that more below, in the software section, as there’s (yet more!) hardware to cover.

Solid as a Dock

If your first impression of the Elite x3 is a sense of durability, then wait until you set up the Desk Dock. This is actually in the default bundle, which comes in a sarcophagus-like cardboard box, sufficient I imagine to entomb a small lawyer.

The Desk Dock (listed at £109 excluding VAT) weighs more than the phone, and feels several times as heavy. This is all good: it’s not one of those docks that skates around your desk. HP has very thoughtfully bundled in a number of adapters to fit different-sized cases. The Desk Dock’s power supply requires a brick – a small brick, but a brick nonetheless.

Round the back are an Ethernet port, a full-sized DisplayPort jack and a micro HDMI port, two USB-A ports and a USB-C port. Thoughtfully, ours also came with an USB-C extension cable. There’s also a security lock, which will stop somebody nicking the Dock, if not the phone.

It’s all pretty straightforward. The x3 drops in with a satisfying clunk, and off you go. (Full specs for the Desk Dock in this pdf.)

Now onto the software and the overall experience.

When Microsoft released Windows 10 mobile a year ago on two new models, it was exposing the public to perhaps the most immature and unreliable operating system I’ve ever seen labelled as a “final release”. (The next most immature: Apple’s first Mac OS X in 2001 – but at least that was stable and didn’t crash all the time.) Even though the Mobile (ARM) edition of Windows 10 lagged behind the x86/IA64 desktop version, it had more bugs, and worse bugs. The joke at the time was that "final" didn’t mean finally ready but terminal.

Over the past year Microsoft has worked hard on fixing the bugs, but the transition will hit anyone still migrating from Windows Phone particularly painfully, as Windows Phone was so meticulously smooth. The Store updates that plagued pioneers for months were finally plugged, so I was surprised to see them return here. The Store app demanded 33 updates for its bundled apps. Three days after setting up the phone, it still required 28 of them. After manually cancelling and pausing many items in the queue, I did manage to unblock it, but the pace remained glacial.

At least Microsoft has achieved its twin ambitions of a (more-or-less) common code base across ARM and Intel, and visual consistency across desktop, tablet and mobile. (Windows 10 is consistently poor for sight-impaired users, thanks to the adoption of scalable wireframe glyphs and a microscopic font size. This default can be increased nicely in the Settings, if you’re persistent – it’s thrown into the Other sub-sub-category.) 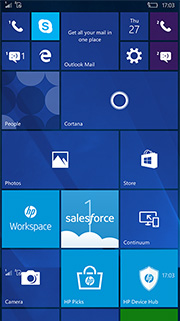 A few UWP apps are bundled with the phone: Salesforce, Skype and Microsoft’s own Office suite. For accessing Windows apps, your choices include bodging along with remote control apps like Microsoft’s own RDP client, or TeamViewer, or if you’re serious, VMWare’s Horizon Client or Citrix’s Receiver. The latter will pipe through to an HTML5 app in the browser.

Next page: Working with Workspace
Page: